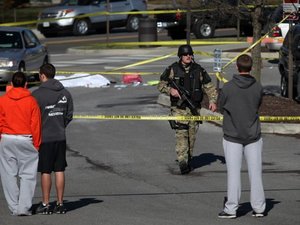 A gunman killed a police officer in a Virginia Tech parking lot and was found dead nearby Thursday in an attack that sent fear through the campus nearly five years after it was the scene of the deadliest shooting rampage in modern U.S. history.

The school locked down for hours and warned students and faculty members via email and text message to stay indoors. The shootings came as university officials were in Washington appealing a fine that U.S. officials gave them over the school's response to the 2007 rampage.

The police officer was killed after pulling a driver over in a traffic stop. The gunman, who was not involved in the traffic stop, walked into the parking lot and shot the officer, Sgt. Robert Carpentieri said. Police wouldn't talk about a motive.

A law enforcement official who spoke on the condition of anonymity confirmed the gunman was dead, but wouldn't say how.

It appeared the gunman died in another school parking lot, where officials said a man was found dead with a gun nearby. While police at a news conference wouldn't confirm the second body was the gunman, Carpentieri said "you can kind of read between the lines."

The campus swarmed with heavily armed police during the lockdown and manhunt. Students hid in buildings, a day before final exams were to begin Friday.

"A lot of people, especially toward the beginning were scared," said Jared Brumfield, a 19-year-old freshman.

"It's crazy that someone would go and do something like that with all the stuff that happened in 2007," said Corey Smith, a 19-year-old sophomore.

Campus was quieter than usual because classes ended Wednesday. The school said exams that were to start Friday would be postponed.

The shooting came as Virginia Tech was appealing a $55,000 fine by the U.S. Education Department in connection with the university's response to the 2007 shootings.

The department said the school violated the law by waiting more than two hours after two students were shot to death in their dorm before sending an email warning. By then, student gunman Seung-Hui Cho was chaining shut the doors to a classroom building where he killed 30 more people and then himself.

The department said the email was too vague because it mentioned only a "shooting incident," not the deaths.

An administrative judge ended the hearing by asking each side to submit a brief by the end of January. It is unclear when he will rule.

Since the massacre, the school has overhauled its alert system and now sends text messages, emails, tweets and posts messages on its website. Other colleges and universities have put in place similar systems.

On Thursday, during about a one-hour period, the university issued four separate alerts.

Derek O'Dell, a third-year student who was wounded in the 2007 shootings, was shaken. He was monitoring the situation from his home a couple of miles from campus.

"At first I was just hoping it was a false alarm," he said. "Then there were reports of two people dead, and the second person shot was in the parking lot where I usually park to go to school, so it was kind of surreal."

Wake up call to make, at feast, Virginia a state free of arms...
MrBrain