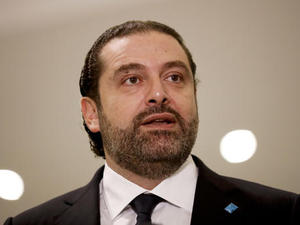 Prime Minister Saad Hariri assured on Wednesday that he will deliver a statement during the Arab League Summit in March that reflects the view points of all the Lebanese.

The PM, who spoke from Cairo, said he will travel with President Michel Aoun to Jordan to partake in the Arab League Summit set for March 29 where his speech will “represent entire Lebanon.”

The PM arrived in Cairo on Tuesday for a two-day official visit for talks with senior Egyptian officials.

The Arab Summit was held last year in the Mauritanian capital Nouakchott and the subject of terrorism was a major item for discussion.

Lebanon's positions with regard to Hizbullah are critical. The country held reservations against Arab resolutions that consider Hizbullah a "terrorist" group.

Former Prime Minister Tammam Salam had expressed during last year's Arab Summit, solidarity with the Arab countries and keenness on the Arab interests, but he told his accompanying delegation ahead of the meeting that should the issue of Hizbullah be raised “Lebanon will respond by saying that it is one of the country's main components and that it is represented in the government.”

On the controversial electoral law, Hariri said that he will fly back to Lebanon on Thursday and the political efforts when he returns will focus on finding a new electoral law, reports said.

Hariri, who spoke after a meeting he held with Egyptian President Abdul Fattah al-Sisi, assured the Lebanese that a new law will emerge soon.

Political leaders in Lebanon are struggling to find a new electoral law to govern the upcoming parliamentary polls.

On his relations with Saudi Arabia, Hariri stressed: “You will soon see me visiting the Kingdom.”