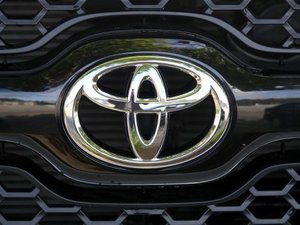 Toyota slashed its full-year net profit forecast on Friday by more than half as Japan's biggest automaker grapples with a strong yen, the impact of the March earthquake and record flooding in Thailand.

The company cut its profit outlook to 180 billion yen ($2.3 billion), well down from its August estimate of a 390 billion yen net profit, which was pared after the Thai floods forced plant closures and caused supply-chain problems.

The maker of the Prius hybrid and upscale Lexus trimmed its global vehicle sales forecast to 7.32 million units for the year ended March 2012, and said revenue would be 18.20 trillion yen this year, down from a 19.00 trillion yen earlier forecast.

Full-year operating profit would come in at 200 billion yen, less than half the 450 billion yen predicted earlier this year, it said.

Toyota, like rival Honda, had withdrawn its earlier full-year forecasts as Thailand's worst flooding in decades forced plant closures, undermining efforts to recover from the impact of Japan's March disasters.

The flooding added to an already challenging year for Japan's automakers, in particular for Toyota as it looks to continue a recovery from millions of safety-related recalls.

The March disaster hit Toyota just as it was recovering from a crisis that saw it recall nearly nine million autos between late 2009 and February last year because of brake and accelerator defects.

Toyota is seen as particularly sensitive to fluctuations in the yen, which has touched fresh post-war highs against the dollar in recent months, prompting the Bank of Japan to intervene in currency markets to tame the unit.

A strong yen erodes the repatriated profits of automakers such as Toyota and makes their domestically made products less competitive when exported.

Japanese companies have been staging a rebound from the impact of the 9.0-magnitude earthquake and a tsunami that left 20,000 dead or missing and crippled power-generating facilities, including the Fukushima nuclear plant.

As power and parts supply woes mounted in the quake's aftermath, automakers announced production disruptions domestically and overseas because of the crisis, temporarily slowing output or shutting plants.

Toyota shares lost 0.41 percent on Friday to finish at 2,636 yen with the profit forecast issued after Tokyo markets closed.