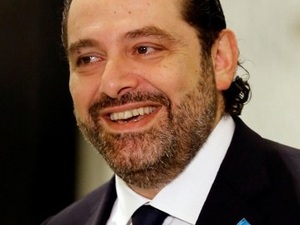 Sources close to Hariri confirmed that he would accept the invitation, but would be keen that King Salman bin Abdul Aziz is present in Riyadh when he heads there.

The invitation comes after reports alleged that relations between Lebanon and Saudi Arabia have again suffered a setback following statements made by President Michel Aoun over Hizbullah's arms.

Reports claimed early this year that Saudi King has canceled a trip to Lebanon allegedly over displeasure concerning Aoun's statements.

During his trip to Egypt, Aoun defended in an interview with Egyptian media Hizbullah's refusal to disarm, describing the Iranian-backed group as complimentary to the Lebanese army.

After his election as president in November 2016, Aoun embarked on an Arab trip that began in Saudi Arabia with the aim of mending Lebanese-Gulf ties which saw a twist in 2016, and activating a halted Saudi arms grant to the Lebanese army.

In 2016, Saudi Arabia halted a $3 billion grant for the Lebanese security forces in response to "hostile" stances of Hizbullah and diplomatic positions.

Relations between Riyadh and Beirut deteriorated after the latter failed to condemn the 2016 attacks by demonstrators on Saudi missions in Iran after the kingdom's execution of a prominent Shiite cleric.

After Aoun's visit, the ban on travelers was lifted but the arms deal remains on pause.

Some1 might get arrested as there are lawsuits against in KSA. myb better to watch out..

Is this Even news?