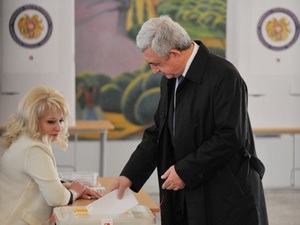 European observers said Monday there was "credible information" that Armenia's parliamentary election at the weekend was marred by "vote-buying" and pressure on voters.

The election, won by the pro-Russian ruling Republican Party, was "tainted by credible information about vote-buying, and pressure on civil servants and employees of private companies," observers from the OSCE, the Council of Europe, and the European Parliament said in a joint statement following Sunday's polls.

The central electoral commission said on Monday that the Republican Party beat the main opposition coalition, led by wealthy politician Gagik Tsarukyan, by 49.2 to 27.4 percent.

Another opposition coalition, Elk, and the Dashnaktsutyun nationalist party received 7.8 percent and 6.6 percent of the vote respectively and will also enter parliament.

Turnout was 60.9 percent, the commission said.

The West views Armenia's election as a key democratic test for the landlocked nation of 2.9 million, which has no history of transferring power to the opposition through the ballot box.

Pro-Russian President Serzh Sarkisian, who heads the Republican Party, has said his government "made enormous efforts so that (the) milestone vote is flawless."

The observers' statement said the elections were "well administered" and praised some measures taken ahead of the vote but added that more needed to be done.

"Despite all of the legal and organisational changes, these elections did not remove long-standing doubts about the reliability and integrity of electoral processes in the country," it quoted Liliane Maury Pasquier, head of the delegation from the Parliamentary Assembly of the Council of Europe, as saying.

After an election in 2008, clashes erupted between police and opposition supporters that claimed 10 lives.

The polls followed constitutional amendments drawn up by Sarkisian in 2015 that his opponents say are designed to perpetuate the rule of the Republican Party, in power for the last two decades.

The amendments will shift the country away from a strong presidency to a parliamentary form of government after Sarkisian's second and final term ends in 2018.