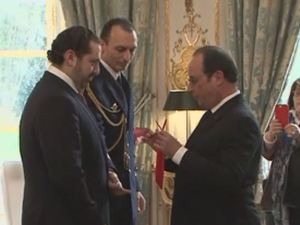 French President Francois Hollande on Monday decorated Prime Minister Saad Hariri with the insignia of Commander in the Legion of Honor over his contributions to Lebanon in the past decade, telling him that Lebanon “can always count on France's assistance and support.”

Hollande also acknowledged that the presence of “1.5 million Syrian refugees” in Lebanon is a major burden on the country, noting that “this requires the solidarity of the international community and France with Lebanon.”

Hariri had begun his official visit to France earlier in the day by meeting his French counterpart Bernard Cazeneuve.

A statement issued by Hariri's office said talks with Cazeneuve tackled “the latest developments in Lebanon and the region, the repercussions of the Syrian refugee crisis, and means to strengthen and develop the relations between the two countries.”

“I wanted to visit Prime Minister Cazeneuve and thank him for everything that France is doing... I explained to the prime minister the situation in Lebanon and informed him that we will attend the Brussels conference and we hope that France will play a big role,” said Hariri after the talks.

“France helped Lebanon during all stages, and we urge all countries to help Lebanon, particularly with regard to the crisis of the displaced Syrians,” Hariri added, urging the international community to “look at the topic in a different way.”

Asked to what extent he is optimistic about the Brussels conference, especially since the London conference “did not fulfill the promises it made towards Lebanon,” Hariri said: “Today there is a government and a president, and we can work harder and faster. In the past, there may have been a lack of consensus within the government regarding this file. Today there is consensus on it, and we as Lebanese will work on it.”

As for his recent visit to Riyadh and whether the issue of assisting Lebanon's armed forces was discussed with the kingdom's officials, Hariri said: “We talked about everything and agreed to establish a higher committee between Riyadh and Beirut within a month.”

“We will then return to the Kingdom, and in the presence of the Custodian of the Two Holy Mosques King Salman bin Abdul Aziz, we will sign several agreements. Like all the joint committees, such as the one with Egypt, there will be economic, industrial, security and military committees and reciprocal trips between the two countries,” Hariri added.

“This has not happened in the past, and we want to reflect this relationship within the institutions of Lebanon and Saudi Arabia,” he noted.

Hariri arrived later in the evening in Berlin for talks with German Chancellor Angela Merkel, his office said.

Empty words. Where are the French donated weapons to the LAF? Nowhere... only America and the U.K. Are actually helping us. France is done, its a weak and corrupt country. We witnessed this with the KSA grant, where French businessmen were running after their commissions, worth 20% of the total grant. They are like Berri and Jumblatt.