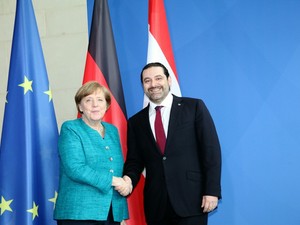 Talks with Merkel focused on the latest developments in Lebanon and the region including the burden of Syrian refugees in Lebanon that will be highlighted during a Brussels conference on Syria's future starting today.

Talks have also focused on the bilateral relations between the two countries.

Hariri said after meeting the German Chancellor: “Hosting the Syrian refugees is a public good, and Lebanon is committed to combating terrorism,” he said, stressing the need for “Lebanese security agencies to receive appropriate international support.”

The PM pointed out that he would talk about Lebanon's vision to promote development at the Brussels conference.

The European Union and the UN host a two-day conference in Brussels starting Tuesday on Syria's future.

For her part Merkel said: “I highly respect the Lebanese people for hosting a substantial number of refugees. We will help it confront this crisis.”

French President Francois Hollande on Monday decorated Prime Minister Saad Hariri with the insignia of Commander in the Legion of Honor over his contributions to Lebanon in the past decade, telling him that Lebanon “can always count on France's assistance and support.”

Talks between the two men focused on the spiraling number of Syrian refugees in Lebanon, where Hollande noted that “this requires the solidarity of the international community and France with Lebanon.”