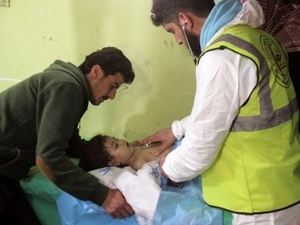 Russia defended its ally Damascus on Wednesday in the face of an international outcry over a suspected chemical attack that killed scores of civilians, saying a Syrian air strike hit a "terrorist warehouse."

The U.N. Security Council was to hold an emergency meeting later Wednesday on the attack, which killed at least 72 civilians, among them 20 children, in the rebel-held town of Khan Sheikhun on Tuesday.

Washington and London have pointed the finger at President Bashar al-Assad's government for the attack, though the regime has denied any use of chemical weapons.

Moscow, which launched a military intervention in 2015 in support of Assad's forces, said the deaths were caused when a Syrian air strike hit a "terrorist warehouse" containing "toxic substances."

The Russian defense ministry said in a statement that the building housed "a warehouse making bombs, with toxic substances," without saying if the strike was accidental or deliberate.

The ministry said the "arsenal of chemical weapons" was intended for fighters in Iraq, describing its information as "completely reliable and objective."

The use of such weapons "by terrorists has been repeatedly proved by international organizations as well as official authorities" in Iraq, it added.

Syria's army had earlier denied any use of chemical weapons, saying it "has never used them, any time, anywhere, and will not do so in the future."

Its denials have done little to quiet international condemnation, with U.N. chief Antonio Guterres on Wednesday saying the "horrific events" showed that "war crimes are going on in Syria."

Others have blamed Damascus more directly for the attack, including British Foreign Secretary Boris Johnson who said "all the evidence I have seen suggests this was the Assad regime."

U.S. Secretary of State Rex Tillerson also pointed the finger at the regime, saying "it is clear that this is how Bashar al-Assad operates: with brutal, unabashed barbarism."

If confirmed, the attack would be among the worst incidents of chemical weapons use in Syria's brutal civil war, which has killed over 320,000 people since it began in March 2011.

It unfolded in the early hours of Tuesday morning, with airplanes carrying out strikes that released "toxic gas" on Khan Sheikun, in the northwestern province of Idlib, according to witnesses and a monitoring group.

"We ran inside the houses and saw whole families just dead in their beds," resident Abu Mustafa told AFP of the attack's aftermath.

The Syrian Observatory for Human Rights, a Britain-based monitor, said at least 160 people suffered the effects of the gas, with medical sources reporting incidents of vomiting, fainting, breathing problems and foaming at the mouth.

Medics worked frantically in the hours after the attack to treat a steady stream of patients, administering oxygen and hosing down victims to wash off chemical residue.

Even as they worked, air strikes hit a medical facility treating victims, an AFP correspondent said, bringing rubble down on top of medics and patients.

Air strikes hit Khan Sheikun again on Wednesday morning, the Observatory said. There were no immediate details on a toll.

Syria officially relinquished its chemical arsenal and signed the Chemical Weapons Convention in 2013, to avert military action after it was accused of an attack outside Damascus that killed hundreds.

But there have been repeated allegations of chemical weapons use since, with a U.N.-led investigation pointing the finger at the regime for at least three chlorine attacks in 2014 and 2015.

The Organization for the Prohibition of Chemical Weapons (OPCW) said it was "seriously concerned" by reports of Tuesday's attack.

The U.N.'s Commission of Inquiry for Syria said it had also begun investigating the "alleged use of chemical weapons".

Britain, France and the United States were to present a resolution to the Security Council Wednesday calling for the OPCW to quickly report findings on the attack.

But it was unclear if Russia would veto the measure, as it has often done with previous Security Council resolutions concerning Syria.

The text calls on Syria to provide flight plans, flight logs and other information on its military operations on the day of the assault.

Successive rounds of peace talks aimed at ending Syria's civil war have failed to produce results, and Syria's opposition warned Tuesday that the attack cast doubt on the prospects for future negotiations.

Sounds much more likely. Syria has nothing to benefit from using chemical weapons, not to mention the fact that they don't have any...

one has to ask one simple question!.... does it benefit the Syrian govt attacking its own people having the internationl stance in favour and the army is in control over the terrorist groups!?, the answer is simple too, NO.

therefore, the only benefiary of such attack is the so-called opposition terrorist groups who feel abandoned and without horizon... they did it.

Southern...... the sixth, ya shattour. Good, you're back on time as demanded. Please post, we need to laugh, laugh, and laugh again after reading about this latest and sad Syrian tragedy.

it benefits the syrian regime poor southern.. why? spread more terror knowing that the russians have his back he believes he is untouchable so one massacre more or less he don't care...

1/ why would he bomb a depot knowing it contains chemicals as the russians claim? they know that the chemicals would spread around and kill...
or 2/ if the regime bombed with chemicals it will result the same.

SO in both cases he knew he would spread horror with your full approval ...!!!!

the 6 millions readers that visit Naharnet everyday are sick and tired of reading Iranian propaganda. you're kindly asked to lower the amount of daily rubbish you spew on here.

one has to ask one simple question!.... does it benefit the Syrian govt attacking its own people having the internationl stance in favour and the army is in control over the terrorist groups!?, the answer is simple too, NO.

therefore, the only benefiary of such attack is the so-called opposition terrorist groups who feel abandoned and without horizon... they did it.

Knight Peace, don't try reasoning with a buffoon, he'll crack you up and you'll still be laughing in your bed. Its dangerous because of sleep deprivation.

Baron Anonymous texas, do you agree that southern and sixth and siblings should come in greater numbers to comment everyday?

Duke Justin, do you think that flamethrower buffoon should create more profiles than the usual?

sounds much more like mowaten's story. Yes of course from complete denial to now bombing a toxic weapons depot. I wonder why the rebels never used them on assad and hezbollah in Aleppo.

That does not make assad and his criminal regime less guilty. Bombing a toxic weapons depot intentionally is as bad as dropping the chemical weapons themselves. What did the regime think would happen to the sarin gas after they bombed the toxic depot?... that it would disappear or cause a massacre?

Russia and Assad's stories are as usual mere lies and propaganda.

Then why do you salafis have depots and warehouses full of toxic substances?

hayalla32, what you write makes sense and is purely logic. but you're dealing with paid propagandists who are literally financed by Khamanei and Bachar. There's nothing you can say to change their mind, their blood money / persian dollars are stronger than any of your arguments.
However, the readers know the truth, they are mostly Lebanese and know what Bachar and father did to Lebanon. Even the mituelians have suffered and disappeared under the Assads. Those who are pro Syria today have sold their souls to the devil.

so those children were not 'sedated' after all as mowaten/flamethrower said yesterday..... they did actually die.

First a toxic warehouse gets blown up, the gas hits the Nusra front and their White helmet allies.

To gain sympathy from the West and other pro salafi organisations, they sedate the children on the pictures.

Because we never saw any outcry to Yemeni children blown to bits and piles of little Arms and legs laying around, but babies with gas masks are more credible for the West.

Sorry, Yemen does not have White Helmets hollywood stars filming and running around.

Yemen is besieged by America not the Saudi Arabia, it is the American fleet that surrounds Yemen and stops the food from coming in to the people in need.

America is a war criminal, Trump is a criminal he bans muslims from coming to America, and whom backs his ideas? The Saudi Princes.

Marquis Ashta, do you think that southern buffoon should be more original when he makes up stories?

Earl i.Report, don't waste you time in my buffoon, I hired him because he can't be reasoned with, that's why he's extremely fun.

If Naharnet deletes this, I will just repost it.

https://www.youtube.com/watch?v=5Vh3_3rH06k
This is what Saudi Arabia and America does to the children of Yemen.
We see no global outrage or Western sympathy for these children in Yemen.

Why? Because Britain, France and America provides the weapons to the Saudis that kills these children.

They used chem weapons on Kurds and Iraqi armies before, this is well known. Perhaps also on the Syrian army.

Did you read about the Hama massacre? 2 feb 1982, 38.000 souls Murdered By Hafez Assad and his brother Rifaat. what about the Halabja massacre? 16 March 1988 killing 5000 kurds by Saddam Hussein and his cousin Chemical Ali? Chemical attacks are in the genes of these diseased lineage. The sons of Hafez are the scum of the earth just like the sons of Saddam were before being rightfully dealt with. Anyone who defends or supports such people is the lie de l'Humanité, there's no other words to describe such people.

Hama was an armed Muslim Brotherhood uprising, nothing more, nothing less.

of course for the hezbi trolls hama was never a massacre perpetrated by the syrian regime... just like they deny the massacres the regime did in lebanon... and thanked syria instead!

you ve been there yourself to tell? LOL

do they need to be right in the city to treat patients? the doctors cannot tell if the people suffer from chemicals?
so the patients they treated were not from idlib too then...

a whole world conspiracy it seems for hezbi lovers....

I just love the competition between Southy and Mowateh... I really wonder which one of'em will be Idiot of the year...

What's going on in Syria and Yemen is a crime. Nobody involved in the conflict is clean. We should all be able to agree on that.

Typical Lebanese thinking lets blame the other side lol no one is asking the fundamental question of why does the Syrian government store and keep chemical weapons if not to use it on their own people. Hey I know what to insure everyone is happy lets start a rumor and blame it on the Yids? yeah thats right the 6 IDF officers caught Burger King in Damascus last week planed it!