U.S. Tells Sudan to 'Step Up' as It Weighs Cuts to Darfur Force 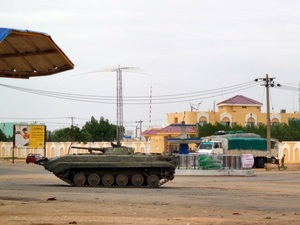 The United States has told Sudan that it would support a drawdown of the huge peacekeeping mission in Darfur if Khartoum shows that it can protect citizens in the war-scarred region.

The United Nations and the African Union have ordered a review of the joint peace mission in Darfur, known as UNAMID, which was deployed 10 years ago and costs $1 billion a year.

"We might not need 17,000 uniformed troops to tackle these challenges," U.S. Ambassador Nikki Haley told a Security Council meeting on Darfur.

"We need the U.N. to start using new tools. And we need the government of Sudan to step up."

Sudan has long demanded an exit strategy to wind down UNAMID, which has been tasked with protecting civilians affected by a conflict that has displaced 2.5 million people and killed 300,000.

The Khartoum government has been accused of obstructing the mission, repeatedly blocking the peacekeepers' movements and preventing supplies from reaching U.N. bases.

Haley said Sudan needs to support the peace process to end the Darfur conflict, protect civilians and prevent community violence before UNAMID is ordered to pack up and leave.

"It is not enough for the government to promise to do better. We need to see proof," she said.

The Security Council is expected to decide on UNAMID's future in June, when its mandate comes up for renewal.

The U.S. administration has made clear it is seeking to cut the U.N. peacekeeping budget and reshape many of the missions that have been deployed in conflict zones for years.

"The mission was never perfect," Haley said of UNAMID, describing it as "by far the most complex and most expensive peacekeeping mission in U.N. history."

After visiting a camp in the Jebel Marra region where 22,000 civilians are sheltering next to a UNAMID base, Lamek said the government must ensure that conditions will allow the safe return of those driven from their homes.

"The government of Sudan must fully play its part, in line with its primary responsibility to protect civilians," said Lamek.

The conflict in the vast desert region of Darfur -- it is roughly the size of Spain -- erupted in 2003, when ethnic minority rebels took up arms against President Omar al-Bashir's Arab-dominated government, accusing it of marginalizing the region.

But a three-year government military offensive has driven out some of the rebel groups, allowing Khartoum to take control of areas in Jebal Marra and fighting has considerably subsided.

U.N.-AU envoy Jeremiah Mamabolo told the council that a unilateral ceasefire declared by Khartoum was largely holding and that two rebel groups had also opted for a truce.