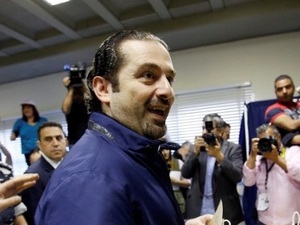 “We will discuss the electoral law (during the cabinet session) on Monday and we will seek to reach a solution,” said Hariri as he arrived at parliament to take part in a plenary session.

“Everyone is keen on this issue and we support reaching a law that ensures fair representation,” he added.

And answering a reporter's question, Hariri confirmed that Mustaqbal is “open to all electoral law formats, including proportional representation and the hybrid system.”

The country has not organized parliamentary elections since 2009 and the parliament has since extended its own mandate twice.

Hizbullah has repeatedly called for an electoral law fully based on proportional representation but Mustaqbal and Druze leader MP Walid Jumblat had both voiced reservations.

Mustaqbal has argued that Hizbullah's arms would prevent serious competition in the party's strongholds while Jumblat has warned that such an electoral system would “marginalize” the minority Druze community whose presence is concentrated in the Chouf and Aley areas.

you're open to anything hezbollah rings your neck with.

Considering how his dear cousin Ahmad is married to a houthian related to hizbalot, nothing will ever surprise me again when it comes to Saad the broke businessman.