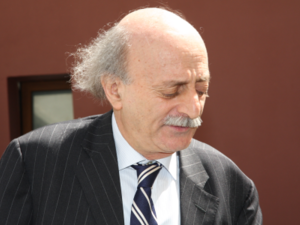 Jumblat who commonly takes to twitter said in a tweet: “The proposed electoral law format nullifies the Christian-Muslim partnership from the 1943 pact and the Taef Accord.”

The 1943 National Pact is an unwritten agreement that set the foundations of modern Lebanon as a multi-confessional state based on Christian-Muslim partnership.

The country has not organized parliamentary elections since 2009 and the legislature has instead twice extended its own mandate. The last polls were held under an amended version of the 1960 electoral law.

The parliamentary electoral law that had been proposed by the Orthodox Gathering stipulates that each sect would elects its own MPs according to a proportional representation system. The proposal’s opponents have dismissed it as “sectarian” and “divisive.”

Hizbullah has repeatedly called for an electoral law fully based on the proportional representation system and a single or several large electorates.

Druze leader Walid Jumblat has rejected proportional representation, warning that it would "marginalize" his minority Druze community, whose presence is concentrated in the Aley and Chouf areas.

But Mustaqbal leader and Prime Minister Saad Hariri has recently announced that he is willing to accept full proportional representation.

welcome mr jumby to z lala land z law of z jungle applies did u forget... corrupted politicians are devising further and further the very fabric of z Lebanese system where each religion, sect neighborhood soon building will vote for its own jungle.

welcommmmeee
SHAME on all of u looser politicians -- all of uu..

Politics based on religion is the definition of insanity but the ruling political class in Lebanon have learned nothing since 1974. Dividing the people and turning them against one another is how they continue to line their pockets with money while the Lebanese citizen suffers. When will the Lebanese people stop following War Lords and pursue the policy of peace and prosperity for all?

in order to achieve this you'll need to find a national coalition similar to Beirut Madinati which comprises unknown yet competent individuals of each sect. that would work. but remember that many of these warlords give jobs to some of their people, that's how they manage to retain power and prevent any usurpation of their their authority.

no it does not and jumblatt knows it. Any election law will have equal number of Christian-Muslim MPs. What Jumblatt is afraid of is that his party and dominance over the druze community will dwindle to 5 MPs under proportional representation.

Proportional representation however is a law devised to enable hezbollah to control parliament, change the constitution, and establish an islamic iranian state.