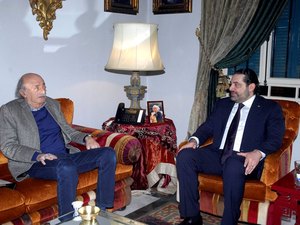 The two leaders did not make statements after the meeting but Abu Faour described the talks as “good.”

“Several electoral systems were discussed – (confessional) qualification (in the first round), the hybrid system and proportional representation in six districts,” Abu Faour added.

Hariri has recently announced that he is willing to accept an electoral law fully based on proportional representation -- an electoral system that Jumblat had rejected, warning that it would “marginalize” his minority Druze community whose presence is concentrated in the Chouf and Aley districts.

Hariri's Mustaqbal Movement had also argued that Hizbullah's arms would prevent serious competition in the party's strongholds under such an electoral system.