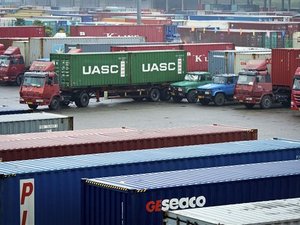 China's exports slowed in November, data released Saturday showed, raising the likelihood of further measures from Beijing to help prop up faltering growth and offset slack demand in the U.S. and European markets.

Exports rose 13.8 percent to $174.5 billion in November, a decline from 15.9 percent growth in October, while China's overall trade surplus plunged 35 percent from a year earlier, to $14.5 billion, Customs statistics said. Imports gained 22.1 percent to $159.9 billion, down from the previous month's 28.7 percent rise.

Other November data showing inflation on the wane and growth in industrial production weakening have added to pressure on Beijing to loosen controls on credit and promote. The government has already begun what it calls "fine tuning," relaxing bank reserve requirements imposed to rein in excessive investment that was fueling inflation.

The data "confirm our view that downside risks in the Chinese economy are rising," the Australian bank ANZ said in a research note. But it said growth would remain near 9 percent — close to the 9.1 percent economic growth reported for the quarter that ended in September.

"The growth of China's exports has dropped for three straight months, and this shows China is facing a risk of a decline in its foreign trade," Zheng Yuesheng, chief of the statistics department of the General Administration of Customs, told state-run China Central Television.

On Friday, the powerful Politburo met and issued a statement confirming China's commitment to keeping a "prudent" monetary policy — intended to keep inflation in check — while adopting a "pro-active" fiscal policy. Instead of the massive stimulus spending ordered in late 2008 to counter the global crisis, analysts say authorities are more likely to rely on tax cuts and administrative measures to help encourage more consumer spending.

But while Beijing strives to encourage more domestic demand and reduce its reliance on construction investment and exports to drive growth, it is also vowing to focus more on growing trade with emerging economies that are more dynamic than those in the U.S. and crisis stricken Europe.

"Under the current situation, (we) should consolidate traditional markets and actively open up emerging markets to help maintain the stable growth of foreign trade," Zheng told CCTV.

Export growth has fallen steadily since hitting a peak of nearly 36 percent in March.

China's monthly trade surplus with the 27-nation European Union, its biggest export market, narrowed to $11.8 billion in November from $13 billion in October as countries that use the euro common currency struggled to contain their sovereign debt crisis.

The touchy trade surplus with the United States also narrowed slightly from the month before to US$19.45 billion in November, as persistent high U.S. unemployment sapped consumer demand.

Despite the impact of the European debt crisis and U.S. unemployment on demand for Chinese goods, other economies are looking to relatively strong China to help drive global demand, though its high trade surplus means fewer of the gains are shared with other countries.

China's import strength is a boon to exporters of iron ore and other commodities such as Australia and Brazil, Asian suppliers of industrial components, and Western producers of factory equipment and consumer goods.

China's trade surpluses with its major Western export markets often are larger than its global surplus because it runs large deficits with suppliers of oil and other raw materials.