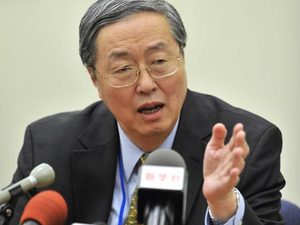 The head of China's central bank says the country will implement changes to its financial system suggested by the International Monetary Fund "as appropriate", the Washington-based lender said.

"Rigorous implementation of international standards and codes is critical in reducing financial risk," Zhou said in his keynote address to Asian central bankers and regulators at the meeting.

In a list of 29 key recommendations on how Beijing can improve its financial system, the IMF urged policymakers to allow state-owned banks to make lending decisions based on commercial risk rather than government policy.

Zhou stopped short of saying the world's number two economy would adopt the IMF's suggestions wholly, including those that Beijing relax control of the yuan currency and allow the central bank more freedom in policy decisions.

"China will further strengthen its financial stability, regulatory and supervisory framework and promote financial reform and development by incorporating the findings of the China FSAP as appropriate," Zhou said.

China is one of 25 "systemically important countries" that has agreed to mandatory IMF evaluations at least once every five years, though Beijing has no obligation to implement the recommended reforms.

Rampant lending since the 2008 financial crisis has left many companies and local governments in China with huge debts, while a recent slowdown in economic growth and falling property prices have fuelled fears of a rise in defaults.

Min Zhu, the IMF's deputy managing director, said "the FSAP should continue to evolve, in response to the needs of member countries, including those in this region."