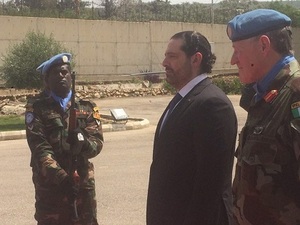 Prime Minister Saad Hariri during a visit to south of Lebanon on Friday affirmed commitment to UN resolution 1701 and stressed that the Lebanese army is the sole legitimate force entitled to defend the country's border.

“We thank our troops and tell them that they are, and only they, are the legitimate force in charge of defending our border,” Hariri told reporters.

“I reaffirm my government’s commitment to the UN Security Council Resolution 1701. We need to put an end to Israeli violations,” added the PM.

Hariri kicked off his tour by visiting the headquarters of UNIFIL forces in Naqoura.

They were greeted by the UNIFIL head of mission and force commander Michael Beary and high-ranking officers of the force, and held a meeting that focused on the situation in the South and the role of UNIFIL with the Lebanese army and all security forces in reinforcing security and stability in the region.

The PM's visit comes one day after Hizbullah party organized a media tour of south Lebanon to offer insights into the defensive measures taken in the past year by Israeli forces along the southern frontier in preparation for any future conflict.

Asked about Hizbullah's move, Hariri said: “It is definitely unacceptable. That is why i am here today to affirm commitment to 1701.”

Hizbullah's tour was criticized by many political parties some dubbing it as an “insult to the State's image” and others as a “strategic mistake.”

The tour was the first since an inconclusive monthlong war with Israel in 2006. It came amid heightened tensions along the border between the old adversaries, with each side promising to inflict massive casualties on the other in any upcoming conflict.

has this trip been coordinated with hezbollah? Does he have permission to visit iranian territory?

he got a special pass issued by Hezbalaflouz.... but it cost him a lot! Dash issues similar passes or 'laisser-passer' in and out of Rakka and Mosoul.

who is he he fooling? His electoral base? I don't think so.

and how much does hariri's commitment carry..... Zero.

Spare us your empty commitments. You are the biggest disappointment to your country and to those who once believed in you.

and guess who the people believe, you or your iranian president?

Aoun also is committed to resolution 1701:)

Hariri said Friday that "what happened yesterday is something that we, as a government, are not concerned with and do not accept."

the he goes and has lunch with hezbollah member fneish at a banquet.