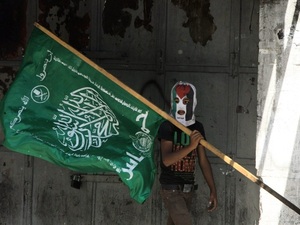 The six-page Document of General Principles and Policies unveiled Monday by Hamas, accepts a Palestinian state within the 1967 borders while refusing to recognize Israel.

The document underscores the Palestinian Islamist movement's right to armed resistance against Israel.

But it says its struggle is not against Jews because of their religion but against Israel as an occupier.

Here are some key extracts from the English-language text of the document:

- "There shall be no recognition of the legitimacy of the Zionist entity."

- "Without compromising its rejection of the Zionist entity and without relinquishing any Palestinian rights, Hamas considers the establishment of a fully sovereign and independent Palestinian state, with Jerusalem as its capital along the lines of the 4th of June 1967... to be a formula of national consensus."

- "Hamas rejects the persecution of any human being or the undermining of his or her rights on nationalist, religious or sectarian grounds".

- "Hamas is of the view that the Jewish problem, anti-Semitism and the persecution of the Jews are phenomena fundamentally linked to European history and not to the history of the Arabs and the Muslims or to their heritage."

- "The right of the Palestinian refugees and the displaced to return to their homes from which they were banished or were banned from returning to – whether in the lands occupied in 1948 or in 1967 (that is the whole of Palestine), is a natural right, both individual and collective... It is an inalienable right and cannot be dispensed with by any party, whether Palestinian, Arab or international."

- "Hamas affirms that the Oslo Accords and their addenda contravene the governing rules of international law in that they generate commitments that violate the inalienable rights of the Palestinian people."

- "Resisting the occupation with all means and methods is a legitimate right guaranteed by divine laws and by international norms and laws. At the heart of these lies armed resistance, which is regarded as the strategic choice for protecting the principles and the rights of the Palestinian people."