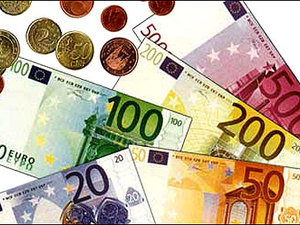 The euro fell against other major currencies in Asia on Monday as investors awaited further details on measures to tackle the Eurozone debt crisis following an EU summit deal struck last week.

The euro bought $1.3340 and 103.57 yen in Tokyo afternoon trade, down from $1.3384 and 103.93 yen late Friday in New York, where the common European currency rose on the tentative fiscal pact struck by European Union leaders.

The dollar was almost unchanged against the Japanese unit, trading at 77.66 yen.

A total of 26 of the 27 EU states signaled their willingness to join a "new fiscal compact" to resolve the crisis threatening to break apart the monetary union.

"Risk-appetite did improve Friday, with stock markets rallying and bond yields in Spain and Italy declining a little," National Australia Bank said in a client note.

"However, the EU summit produced no silver bullet and so investors will be watching for clarification this week on whether the measures announced are likely to be implemented and how effective they may be in stemming the debt crisis."

Debt auctions for Italy and Spain this week will provide an insight into investor sentiment after the announcements, it said.

The dollar was mixed against other Asian currencies.