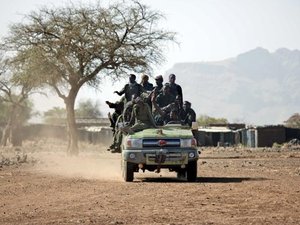 Heavy fighting between the Sudanese army and southern-aligned rebels in the embattled state of South Kordofan has killed at least 19 government troops, a rebel spokesman said on Monday.

"There was heavy fighting on Saturday in Warni, in the far east of Talodi locality. The SPLA repelled an attack by the army. They left 19 bodies on the ground," Arnu Ngutulu Lodi told Agence France Presse.

The Sudanese army spokesman could not immediately be reached for comment.

Lodi said the clashes followed three days of fighting in the northern Rashad locality, where the rebels managed to expel the army from the Abu al-Hassan area, and that the two sides were battling on Monday in the Taruje area, near the disputed southern border.

"The fighting now is going on in Taruje. There are heavy artillery bombardments. The SPLA has surround the SAF (Sudanese armed forces), who are under a lot of pressure. Any time now they will be driven out," he claimed.

The conflict erupted in South Kordofan in June between the army and militiamen who fought alongside the ex-southern rebels during their 22-year conflict with the north, as Khartoum moved to assert its authority within its borders ahead of South Sudan's independence in July.

A similar conflict broke out three months later in nearby Blue Nile state.

Direct clashes in Jau last week between the armies of north and south, who fought a devastating 22-year conflict prior to the 2005 peace deal, prompted South Sudan's army spokesman to warn of a "war situation" that would escalate with the arrival of more northern troops.

Sudan insists that Jau lies squarely within its borders but is a key supply route used by the south to funnel weapons and ammunition to the rebels in South Kordofan.

The United Nations refugee agency said last month that the number of people fleeing the unrest in Sudan's two warn-torn Border States is likely to reach 100,000 by the end of the year, up from around 80,000 now.