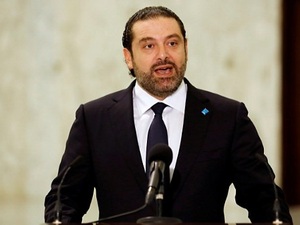 Prime Minister Saad Hariri emphasized on Wednesday that Lebanon's position during the Riyadh summit stems from President Michel Aoun's oath of office and the ministerial statement of the government.

“Lebanon's position, reflected through our national unity, stems from the oath of office and the ministerial statement. Positive atmospheres and distancing Lebanon from problems around us is crucial,” said Hariri during a cabinet meeting at the Presidential Palace.

He stressed that the country's participation in the conference was a normal procedure, “we are always working on restoring our relations with all countries, this is important for us,” said Hariri.

"We have to acknowledge the changes happening in the region. We must distance Lebanon from that because we do not want to be part of any conflict. We do not want Lebanon to support one side against another, it is our major policy," Hariri stressed.

The PM pointed out that he had discussed the situation in Lebanon and the region with several country leaders on the sidelines of the summit, and invited them to visit Lebanon.

He also noted his agreement with Saudi officials to hold the Lebanese-Saudi Joint Economic Committee during the holy month of Ramadan.

On the thorny electoral law issue, Hariri said: “There must be a way to agree on a new law. No one would accept vacuum or the 1960 (electoral law). I believe there is a real chance to agree on one.”

We must distance Lebanon from that because we do not want to be part of any conflict. We do not want Lebanon to support one side against another, it is our major policy," Hariri stressed.

and how is having Hezbollah which is part of your government waging wars in Syria, Iraq and Yemen accomplishing what you just said?

The Saudi's keep undermining Lebanon...the fact Lebanon's President was not invited is enough to understand their sinister behavior.

Either Lebanon bows to the Saudi will or else.
Hariri needs to clarify his true identity..is he Lebanese or Saudi?

the summit invited heads of states that are intent on fighting terrorism; aoun is not. He is allied with a terrorist group and he became president as a result of that alliance.

I am your obsession..what else would drive a person to log in & out with new names of me to post?

try to stick to one name, try to address the topic & finally at least try to have a life outside of naharnet.

Whatever allows you to lead a normal life dude.

So you're telling us that in Iran they have elections?

Damn, that means I can't tell you to go comment on your Saudi elections...It doesn't exist ...shame that!

Monarchy still have elections ...but hey your love of the human rights & free elections of the world just fade away when it comes to your beloved Saudi's.

This is an English site...post in the Kings English.
there are many sites in Arabic, french etc...get a grip on reality people.

I wish I spoke Farsi or as many languages as possible. do you think your offending me by claiming I speak multiple languages?

But hey if you want to credit me with speaking multiple languages then cheers dude.

How would you know aliens? Gigahabib has many names like Flamethrower et Mowaten.

Unless you also are mega/gigahabib???

@problem.solver u must admit KSA is nothing but another corrupt and unfair regime disguised as Monarchy.

They think the world is blind and cannot see the contradiction between what they do and what they preach. Just a bunch of pretenders that's what they are!

Power corrupts any human being. Even the Holy Pope (whom I admire, respect greatly) is in his own way corrupt because of his power. Nobody is spared! Corruption can take many forms, it isn't always about dough.

Our President bows to Hezbollah and its weapons...it is worse than bowing to anything else!

the night security guard who works at an airport has the technical know how to do that;))))

what has your shia venom against saudi arabia got to do with the article and hezbollah's terrorism?

I have the utmost respect for Mr. the roar for his firm stance on patriotism and iranianism.

No no no, all the respect to you ice-norma-terro etc etc.

I mean all these hours you put in every day just to tell us how you respect.

Reading posts whilst waiting at airports etc is not the same as you guys who are here posting 24/7 & even having the time to make giffs, change names etc etc.
Texas even admitted he only started posting from 7am his time because thats when he woke up..he was still posting 16 hours later.

reading posts in your spare time is the same as you guys right?

No I'm at home making a few comments on nahrnet & having a laugh at your expense.
\
as for my private life, Its fine but thanks for asking.

please do check....You will see how you are here without fail.

well said eagleyawn...I am all for looking at the history & seeing who never misses a day..some even copy & paste every single day

Paranoia is a lethal disease

did anyone mention your name? why is that whenever those names are called out you start crying?

Don;t tell me to add you to the list...I mean it seems suss dude.

add me for sure; I will make your nightmare even more enjoyable

what is your measure of a good Christian? you and your fake Christian aliases flamethrower etc?

When somebody is against your iranian farsi sectarian militia he is automatically labeled by you as a ISIS supporter and therefore he cannot be Christian. What do you know about Christians?? Even the Aounis who are politically allied with your militia hate what you stand for and look down at you as savages.

Barrymore, where & when did I ever say you can't make your voice heard regarding any matter? what I have always claimed is if you have a valid argument based on facts then put them forward in a civilized manner, something most on here are unable to do.

You guys claim to be on the good side & mowaten mystic etc are on the bad side....just look at the discourse between them & you lot.
You guys wouldn't know how to debate with any decency, in fact every sentence you guys start with is name calling etc..

Just watch the two sides debates & it becomes very clear who is debating & who is throwing trash without reason.

the_roar 1 hour ago
spoken like a true follower of our Lord Jesus Christ.

Yes you a true Christian indeed...you have more hate than any daesh representative but use the Christian faith to pour the vile of your tongue on the forum.

sorry, i misinterpreted your comment above. You were debating and presenting an argument based on fact and you were not name calling and insulting.

Spare us your iranian BS.

barrymore, either you're in denial or just unable to see the truth.

Who presented a debate & who chose to respond with personal hate comments?

once again just in case you're slow, I put forward my post & was responded to without any decent discourse or debate, but all personal attacks.....now where are you & the so called Christian to condemn the party at fault?

you guys are so programmed to hate ...but hey you represent the good side right?
just take a look at the names you guys make up...nice language & nice discourse to match..

one only has to look at how you guys behave to see which side is the bad.

More like a petard mouillé. How would you translate this to English? Wet fireworks? mdr!