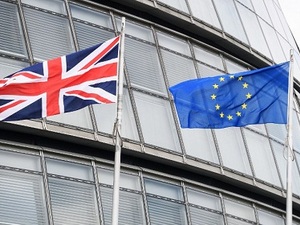 Britain and the European Union began their first formal Brexit negotiations Monday, under pressure to seal a deal amid disarray in London over whether to go for a hard or soft divorce.

At stake is not just Britain's future but also Europe's post-war political order and its place in the world which could be fatally undermined without an agreement by the March 2019 deadline.

The EU's chief negotiator, France's Michel Barnier, welcomed his counterpart David Davis with a handshake and smiles for the press in the European Commission's landmark headquarters in central Brussels flanked by the EU and British flags.

"Today we are launching negotiations on the orderly withdrawal of the UK from the EU," said Barnier, a former European commissioner and French foreign minister.

Their first task must be to "tackle the uncertainties caused by Brexit," he said, citing the rights of EU citizens in Britain and the possible impact on the open border between Northern Ireland and the republic.

"I hope that today we can identify priorities and a timetable to allow me to report to (EU leaders) later this week (that) we had a constructive opening of negotiations."

Davis, a prominent tough-talking figure in the "Leave" campaign, sounded a positive note too, saying "there is more that unites us than divides us."

"In testing times like these we are reminded of the values and resolve we share with our closest allies in Europe," he said, referring to the latest reported terror attack overnight in London and the loss of lives in forest fires in Portugal.

Davis said the talks would be carried out in "a positive and constructive tone," with Britain looking to forge a "strong and special partnership for the future."

Last year's Brexit vote came as a profound shock to Brussels against a backdrop of rising anti-EU sentiment, with many -- including now U.S. President Donald Trump -- predicting the bloc's eventual break-up.

May officially triggered the two-year Brexit process in March when she was riding high in the opinion polls.

She then announced -- despite having ruled it out repeatedly -- that she would seek a fresh mandate to give her the authority to push through a Brexit deal, or even walk away without one if need be.

But instead she lost her parliamentary majority, putting that hard-line approach and her political future in doubt after the disastrous June 8 election.

Britain appears to have given in on the EU's insistence that the negotiations first focus on three key divorce issues, before moving onto the future EU-UK relationship and a possible trade deal.

Those issues are Britain's exit bill, estimated by Brussels at around 100 billion euros ($112 billion), the rights of three million EU nationals living in Britain and one million Britons on the continent, and the status of the border between Northern Ireland and Ireland.

"Sitting down for a first formal negotiation round is something in and of itself," an EU source told AFP.

After the initial shock of last year's Brexit vote, the bloc at 27 appears to have steadied in recent months and got a real boost with the election of new French President Emmanuel Macron in May.

Worried by immigration and loss of sovereignty, Britain voted last year to end its four-decades-old membership of the 28-country bloc -- the first state ever to do so.

An increasingly concerned EU has been pushing London to hurry up, with time running out for a deal and three months already gone since May triggered the two-year Article 50 EU exit process.

Monday's talks however are likely to focus on the practical details of timings for the coming months, with the big, divisive issues left aside for now, officials said.

May herself will also have a chance to update the other 27 EU leaders on her Brexit plans at a summit in Brussels on Thursday.

"The best way we can spend this week is to rebuild trust," rather than tackle the big difficult issues right at the start, another European source said.

Many in Brussels fear that London has no real strategy, with May under pressure at home, still trying to close a deal with a conservative Northern Ireland party to stay in power, and facing criticism for her handling of the aftermath of a devastating tower block fire.

Finance minister Philip Hammond confirmed Sunday that it was still the plan to quit not only the EU but the customs union and single market as well.

But he warned that "we need to get there via a slope, not via a cliff edge."

Barnier has warned that the negotiations must be wrapped up by October 2018 to allow time for all parties to ratify a final accord by March 2019.