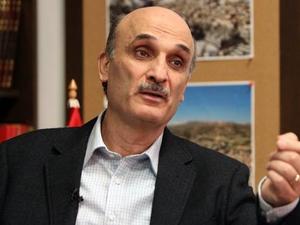 Lebanese Forces chief Samir Geagea criticized Hizbullah leader Sayyed Hassan Nasrallah's Friday remarks about Gulf countries, and pointed out that the cabinet is the eligible authority to tackle Israel's threats against Lebanon as he assured that Lebanon's border will not be opened for foreign fighters.

Dubbing Nasrallah's speech as “escalatory”, Geagea said that any report about Israeli threats against Lebanon should have been discussed at a cabinet meeting.

“Right action requires that if there is information about an Israeli threat, it should have been presented to the cabinet,” said Geagea in an interview to Free Lebanon radio on Saturday.

The LF chief stressed that defending Lebanon from an Israeli aggression can't be waged through opening the border for foreign fighters.

“If we want to defend our country against an Israeli aggression we will not open the border and bring in thousands of foreign fighters. The Lebanese army and people will defend the land,” stressed Geagea.

The LF chief was replying to Nasrallah's remarks when he said that “hundreds of thousands of Arab and Muslim fighters would be ready to strike back against an Israeli attack."

Nasrallah also said that Israel does not intend to wage a war on Lebanon in the near future but warned that “tens of thousands” of foreign fighters could fight alongside the “axis of resistance” in any future conflict.

He said “Israel is refraining from waging wars on Lebanon and Gaza because it knows very well that such a move would be costly due to the resistance's capabilities.”

“These countries have done no harm to Lebanon. What has Saudi Arabia done for Lebanon? No one has the right to manipulate the interests of the Lebanese people.”

In his speech, Nasrallah launched a campaign against SA and said “the Saudi regime is too weak and impotent to be able to wage a war on Iran.” He also accused Saudi Arabia of trying to isolate Iran.

Turning to Nasrallah's remarks about Palestine, the LF leader said: “The Palestinian people have their own representative, authority and parties that speak on their behalf. Nasrallah may not place himself as their spokesman.”

I could go on and list a thousand reasons why I have the utmost respect and admiration for Dactor Geagea, but it suffices to mention a few:

Indeed! No one is able to analyze events the way you do. I am glad you have been able to put some new order in this chaotic world.

“If we want to defend our country against an Israeli aggression we will not open the border and bring in thousands of foreign fighters. The Lebanese army and people will defend the land,” stressed Geagea.

southern POS, your Iranian funded Terrorist in Chief OFFICIALLY invited terrorist factions from Syria, Iraq, Iran, Afganistan, Yemen to come to Lebanon. It took us so many years to neutralise the Palestinian threat and now your POS Hassin is willing to ruin Lebanon even more. I think it's time to kick Hizbalot and its supporters out of Lebanon.

It is a known fact that living in the sewers like a rat out of fear and cowardice, like Hassan Nesnasrallah has been doing since his resistance's "divine victory," is the epitome of liberty and dignity! BTW Southern how do you like your town and home that a gulf country rebuild, I bet they're nicer than Hassan's forever sewer home.

The Lebanese resistance no longer exists. It's been destroyed and many of it's leaders and intellectuals murdered by "The Islamic Revolution in Lebanon" aka Hezballah. They then changed Revolution to Resistance to make it sound less threatening although the goals have not changed. Now they call themselves "The Islamic Resistance in Lebanon", it says so right on the tin. They went out of their way to spell it out for you idiots so you don't get confused. Still, "make it idiot proof and someone will just make a better idiot!"

Southern: "maybe he prefers to be subjected like many others in this countries"

No, no one else would want to be like this guy
https://www.youtube.com/watch?v=fWjgln7EBU0

You seem to be a little lost, maybe you should have listened to what Nasrallah said yesterday. Geagea is commenting on the rant Nasrallah gave yesterday in which he did not mention Qatar at all. So there is no need to for Geagea to be more precise in what he said, it's self explanatory.

more BS from the king of BS