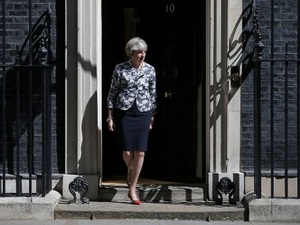 British Prime Minister Theresa May's Conservatives signed a deal Monday with  Northern Ireland's Democratic Unionist Party that will allow them to govern after losing their majority in a general election this month.

"An agreement has been signed," May's spokesman told AFP without revealing the details.

Northern Irish DUP leader Arlene Foster said she was "delighted" that a deal had been struck, while May said the Conservatives and the DUP "share many values" and Monday's agreement was "a very good one."

The agreement was signed by senior Conservative official Gavin Williamson and senior DUP member Jeffrey Donaldson, as May and Foster looked on.

The Conservatives have 317 seats in the 650-seat parliament after the June 8 election and need the support of the DUP's 10 MPs to be able to govern.

Discussions between the two began immediately after the election and centered on a "confidence and supply" deal in which the DUP would support the government in any confidence votes and to pass budgets.

The prospect of a deal with the ultra-conservative DUP has caused consternation in Britain since the party opposes gay marriage and abortion.

Some of its representatives have also been criticized in the past for homophobic comments, climate change denial statements and sectarian rhetoric.

Ireland's former premier Enda Kenny has warned that a deal with the Protestant and pro-British DUP could upset Northern Ireland's fragile peace.

London's neutrality is key to the delicate balance of power in Northern Ireland, which was once plagued by violence over Britain's control of the province.