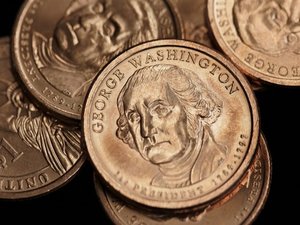 The U.S. administration said Tuesday it was ending routine production of one-dollar coins in the face of consumer resistance despite a decades-old campaign to replace the paper bill with more durable metal.

Vice President Joe Biden said the U.S. Mint would suspend the production of presidential dollar coins for circulation, noting that nearly 1.4 billion surplus dollar coins are sitting in Federal Reserve vaults due to lack of demand.

"They make hundreds of millions of these coins every year, 40 percent end up being returned to the Federal Reserve because nobody wants them," Biden said.

"Today, the Mint was scheduled to make 1.6 billion additional dollar coins over the next five years. Well, no more. From now on, we're only going to make as many coins as collectors demand, and we're going to charge a premium, so it doesn't cost us a dime to make those dollar coins."

The Mint will still be required, by law, to continue to produce a relatively small number of the coins to be sold to collectors. But instead of producing 70-80 million coins per president, the Mint will now only produce as many as collectors order.

Circulating demand for $1 coins will be met through the Federal Reserve's existing stockpile, which will be drawn down over time. Overall, officials said this step will save at least $50 million annually over the next several years.

The effort to promote the $1 coin has had a checkered history. Even though experts say the use of coins would save billions over time because they last longer than paper bills, Americans have not embraced them.

The Susan B. Anthony dollar honoring the women's suffrage leader got a lukewarm response when introduced in 1979. Faring little better was the Sacagawea dollar coin featuring the Native American guide to explorers Lewis and Clark.

In 2005, Congress passed a law requiring production of dollar coins featuring each of the US presidents. But these have been slow to gain currency as well, with Americans attached to the one-dollar bill with the image of George Washington.

With the government seeking ways to cut costs, groups such as the Dollar Coin Alliance -- which includes transit agencies and vending machine operators which would benefit from a transition to coin -- cited a recent study which said trading the dollar bill for coin would save $5.6 billion over 30 years.

The coin alliance said the administration made the wrong move, and would have saved more money by eliminating the paper dollar bill.

"If the administration's concern is reducing waste in our $1 currency supply, the smart solution is to eliminate the antiquated $1 bill," the alliance said in a statement.

The statement said the dollar coin program "reduces the federal deficit by nearly $300 million each year" and that official Mint figures for 2010 showed "the $1 coin program made a net profit of $283 million, all of which was transferred to the Treasury General Fund to reduce government debt."

But Treasury Secretary Timothy Geithner said the suspension "represents a significant opportunity to reduce costs and improve efficiency. In these tough times, Americans are making every dollar count, and they deserve the same from their government. We simply shouldn't be wasting taxpayer money on money that taxpayers aren't using.