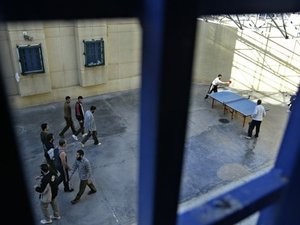 International pressure on the Palestinian Authority to halt payments to the families of Palestinians held in Israeli jails, including those convicted of attacks, could trigger political crisis, rights groups say.

Palestinian President Mahmoud Abbas is caught between pressure from U.S. President Donald Trump's administration and a potential backlash from Palestinians, most of whom view their prisoners as heroes.

Those killed carrying out attacks against Israelis are regularly venerated as "martyrs."

Palestinian officials say some 850,000 people have spent time in Israeli prisons in the 50 years since Israel seized the Palestinian territories in the 1967 Six-Day War.

Israel currently detains some 6,500 Palestinians for a range of offenses and alleged crimes.

It says making payments to the families of attackers encourages further violence.

But for Palestinians, such payments are a key source of income for families who have in many cases lost their main breadwinner.

They are also symbolically important after decades of yearning for elusive statehood and struggle against Israel's occupation.

A recent poll showed that 91 percent of Palestinians oppose suspending stipends to those in Israeli jails for security-related offenses.

"To lay a finger on the prisoners' rights is to attack the Palestinian struggle," said Helmi al-Aaraj, director general of the Center for Defense of Liberties and Civil Rights.

Since 2004, Palestinian law has stipulated that the government pay allowances to families of those jailed for attacks and activities against Israel and Israelis.

The legislation obliges the Palestinian authorities to ensure "a dignified life" to inmates and ex-prisoners by "guaranteeing their economic rights and those of their families."

"If their rights are eroded we are heading for a real crisis in Palestinian society and in due course toward an explosion," Shawan Jabarin of Palestinian rights group al-Haq told the AFP news agency.

The Palestinian Authority has until now made regular payments to prisoners' families based on the length of their sentence.

They range from $400 per month for relatives of prisoners incarcerated for up to three years, rising to $2,200 for family members of those sentenced to 18-20 years.

Palestinian sources involved with prisoner affairs told AFP on condition of anonymity that the PA had suspended payments to families of 277 prisoners and ex-prisoners at the beginning of June.

No Palestinian official has so far commented and the PA's silence is encouraging speculation.

"There is U.S. and Israeli pressure to stop paying stipends to prisoners and their families," Aaraj said.

U.S. Secretary of State Rex Tillerson in June told U.S. lawmakers that Abbas had agreed to stop payments to attackers.

"They have changed their policy, at least I have been informed they've changed that policy," Tillerson said.

Israel however said it saw no evidence of such a decision and Palestinian officials would not confirm it.

After a Palestinian assailant fatally stabbed an Israeli policewoman in June, Israeli Prime Minister Benjamin Netanyahu called on world leaders to "demand the immediate cessation of Palestinian Authority payments to the families of terrorists."

The issue was raised during Trump's visit to Israel and the Palestinian territories in May.

Halting the payments is expected to be one of the concessions demanded of Palestinians in order to revive moribund peace talks.

Israel, which collects customs duties on goods destined for Palestinian markets then transfers the money to the PA, is considering using that arrangement to apply more pressure.

Its parliament is mulling a bill to deduct from the transfers the same amount as the PA pays out in prisoner stipends.

"It seems impossible for the Palestinian Authority to take a decision on this subject under American and Israeli pressure," Palestinian political scientist Abdel Majid Suilem said.

The wife of veteran inmate Nael Barghouthi said the payments she used to receive had ceased without explanation in early June.

Barghouthi was sentenced to life imprisonment in 1978 for what the Israeli army said was "a series of security offenses, including murder."

"We just want the (Palestinian) law to be observed and to know what is happening," Nafea Barghouthi said at a recent gathering of ex-prisoners and current inmates' wives whose incomes have also dried up.

Ex-prisoner Yasser Hijazi said he was shocked to find his benefits terminated at the height of the Islamic holy month of Ramadan, a time of increased family expenses.

He had been released in 2011 after 11 years behind bars and got no explanation from PA officials for the sudden cut.

"We were not told anything," he said.