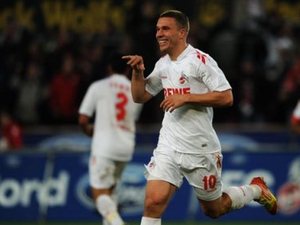 Cologne striker Lukas Podolski has poured cold water on Schalke 04's ambitions to sign him by saying he cannot imagine switching to another German league club.

Germany international Podolski, who is under contract until 2013, hit a late equalizer for Cologne in their 1-1 draw with Mainz Tuesday, thus netting his 14th goal of the season and 10th goal in eight league games.

There has been a maelstrom of interest around Podolski in the German media since Schalke revealed last Saturday they are interested in signing him, but the striker effectively ruled out moving to another German club.

"I find it very difficult to imagine a change to another club in the Bundesliga," he told German magazine Sport Bild.

"If I leave Cologne, joining a foreign club appeals to me in any case.

"When I look at the inquiries already received, I am looking to see if the club plays international or Champions League football."

Cologne, who sit 10th in the league and seven places behind third-placed Schalke, said they are eager to offer Podolski a contract extension during the German league's four-week winter break, which starts on Sunday.

Podolski admitted he is becoming frustrated by the barrage of questions about his future and says he imagines playing on a bigger stage.

"Some people only seem to think of me in terms of playing for Cologne," he said.

Having started his career at Cologne, Podolski spent three unfruitful years at Bayern Munich after the 2006 World Cup, but returned to the Rhineland club in 2009.

He has been criticized by both Cologne's director of sport Volker Finke and Dortmund manager Jurgen Klopp of being inconsistent, but he has scored 10 of Cologne's last 14 goals in the Bundesliga.