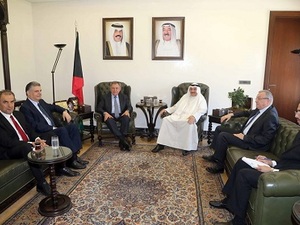 A Mustaqbal bloc delegation led by ex-PM Fouad Saniora on Monday visited Kuwaiti Ambassador to Lebanon Abdul-Al al-Qinai to condemn alleged Hizbullah involvement in a “terrorist cell” that has been busted in the Gulf emirate.

“We came here today to express, in the name of al-Mustaqbal parliamentary bloc, our condemnation of the presence of a Hizbullah group in the so-called al-Abdali cell, which has been verified after a three-year trial,” said Saniora after the talks.

“This act would only lead to sabotaging ties between Lebanon and the brotherly state of Kuwait, which was among the first countries to embrace Lebanese expats,” he added.

“The state of Kuwait has always stood by Lebanon and supported its stability, growth and development,” Saniora went on to say.

Mashnouq said the meeting tackled the issue of the letter of protest that Kuwait has submitted to Lebanon over Hizbullah's alleged involvement in the cell.

Expressing his “great respect for Kuwait,” Mashnouq expressed “his readiness and the readiness of the Lebanese security agencies to cooperate with the Kuwaiti interior ministry and to offer any help possible in this case or any other issues,” Lebanon's National News Agency said.

The supreme court in Sunni-ruled Kuwait, which has a sizable Shiite minority, last month convicted 21 Shiites of forming a "terrorist cell" with ties to Iran and Hizbullah and plotting attacks in the Gulf state.

Kuwait has protested to Lebanon over the alleged training of the cell members by Hizbullah, which has ministers in the Lebanese government.

Earlier this month, Kuwaiti authorities expelled 15 Iranian diplomats and shut down the military, cultural and trade missions of the Iranian embassy in Kuwait over Tehran's backing of the "terrorist cell."

Iran said the allegation is baseless

Fourteen of the 21 convicted members are on the run. Local media said they fled to Iran by sea.

Around a third of Kuwait's native population of 1.35 million are Shiites.

the Cristhian Army of Russia must take control of Kuwait !!!??? that dogs want´s to promoted the expantion of Daesh in Lebanon...

Wow, you guys really love me. How many imposters do I have now, five?

Instead of deploring and paying lip service, do something about it in the cabinet where your glorious party " Lubnan Awalan" sits just across the table from the terror group.

Wow Mashnouk will cooperate? then the problem like the previous garbage issue will all be resolved. I can see it now he will make Kizb's leadership all stand in line and await their fait. looooooooool what a joke.