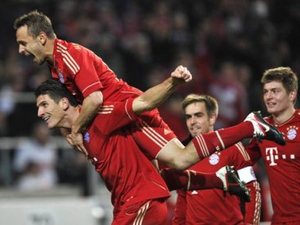 With the unofficial title of "winter champion" nearly secured before the visit of Cologne on Friday, Bayern Munich is uncharacteristically calm ahead of the year's last weekend of Bundesliga play.

Bayern is three points ahead of Borussia Dortmund and Schalke, and a vastly superior goal difference should ensure the top spot going into the league's four-week break.

But Cologne hasn't lost in Munich in six years and former Bayern player Lukas Podolski is enjoying his best season with 14 goals.

Podolski says "we'll try to annoy Bayern a bit, like in the last years."