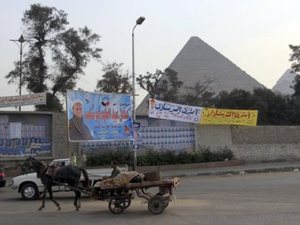 Egypt's longtime national goalkeeper Nader el-Sayed had never been interested in politics. But when in January he joined hundreds of thousands in Cairo's Tahrir Square to demand regime change, he knew a new career was in the making.

The veteran player, who won more than 100 caps and was twice voted best goalkeeper in the African Cup of Nations, is standing for parliament in the first elections since a popular uprising ousted Hosni Mubarak after three decades of rule.

Sayed, 38, is lending his star power to the al-Wasat party -- a moderate Islamist group which is an offshoot of the powerful Muslim Brotherhood and which he joined three months ago.

"We had a popular revolution, now it's time for the political revolution," Sayed told AFP in the party's offices in Cairo, where wooden shutters and double glazed windows did little to muffle the sound of car horns or filter out the exhaust fumes.

Egyptians are voting in the second phase of a parliamentary election that is set to shape the political landscape of the Arab world's most populous nation, with Islamists emerging as front-runners.

Al-Wasat is one of a kaleidoscope of rival Islamist parties, often mistaken for one homogeneous group.

"I wanted to join a political party, not a religious movement," said Sayed, slamming the Muslim Brotherhood and the ultra-conservative Salafi movement -- which both have political parties competing in the election -- for mixing religion with politics.

"We need to participate without using intellectual, religious or economic terrorism," he said.

Longtime goalkeeper for premier league Cairo side Zamalek, Sayed had never been interested in politics.

But he says he watched as corruption and social injustice ate away at the Arab world's cultural capital, and the government tried to use football to distract the population from the country's political and economic woes.

Years of pent-up frustration finally boiled over when unprecedented protests erupted on January 25 to demand democratic change, electrifying the country for 18 days.

"It was something I had waited for so long," said Sayed, known across the country as "Captain Nader."

Many remember the image of Sayed draped in an Egyptian flag being carried by protesters in Tahrir Square, his fists pumping in the air and his voice breaking as he shouted the Arab Spring's signature chant: "The people want the downfall of the regime."

Ten months later, the retired footballer is in the frame for another kind of competition.

He is standing in the district of Giza, a mosaic of slums and sprawling gated communities, and one of nine provinces voting in the second phase of the elections.

Posters of a breezy-looking Sayed, arms crossed and wearing a crisp white T-shirt -- as if in a team photo -- are plastered on walls, hanging from trees and fixed to lamp posts.

He says he joined al-Wasat because he was looking for a party "with a revolutionary spirit."

Al-Wasat was founded by Abul Ela Madi who split from the Muslim Brotherhood 15 years ago, and has since been a vocal critic of the influential movement over its centralized decision-making process and rigidity.

Madi was also a founding member of Kefaya (Enough), a protest movement that shook the Egyptian political scene out of indolence in 2004, planting the seeds for the 2011 uprising.

Sayed says the new parliament, the first fruit of the revolution, must work for the protesters' demands.

"I want a civil state, with rights, equality and citizenship," said Sayed.

He also wants to advance his own sport, after having watched the government exploit the game he says shaped him and catapulted him from the Nile Delta city of Mansura to the capital and on to Europe, where he played in the Belgian and Greek leagues.

"Football has long been abused by the former regime. It must be free from politics or religion," said the father of four, who now runs a football academy in the district where he is standing.

"It teaches loyalty, team building... It's a metaphor for life."

Mubarak's regime and family had tried to associate themselves personally with football -- the national obsession -- and members of his now dissolved National Democratic Party would offer huge sums of money to get fans to display the party logo, Sayed said.

He recalls one time when coming back from a successful championship in Japan, the government wanted to create a buzz and closed off all the streets from the airport to the ground of al-Ahly, Zamalek's great city rivals where he had a brief stint.

"Had the roads been blocked because the fans came out to greet us, it would have been wonderful. But this was an interior ministry decision. It was complete abuse," said Sayed.

"It's time to clean up the sport, and the country."