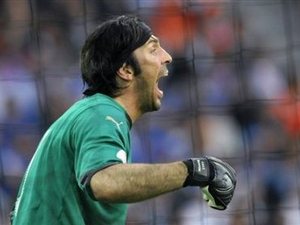 Juventus goalkeeper Gianluigi Buffon has dismissed talk of his side's title chances as the Serie A's joint leader prepares to take on struggling Novara on Sunday.

Juventus, which was held to a 1-1 draw at Roma on Monday, is now level on 30 points with Udinese at the top of the standings.

The Turin side will play Udinese on Wednesday in a game that is already being seen as a real test of Juve's title credentials.

However, Buffon sought to play down the speculation, saying: "It's a bit hazardous to talk about the title."

The top two clubs have a two-point lead over both AC Milan, which hosts Siena on Saturday, and Lazio, which is Udinese's next opponent.

Inter Milan visits Cesena looking for its third win on the trot.