Hariri from Arsal: State is Your Sanctuary, Services to Reach Town 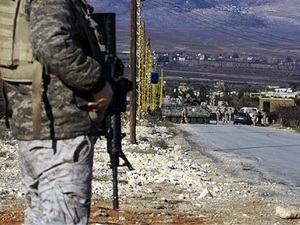 Prime Minister Saad Hariri on Wednesday paid a surprise visit to the northeastern border town of Arsal where he received a popular welcome, shortly after he inspected army units in the nearby border town of Ras Baalbek.

“My visit to Arsal is a duty owed to this town, which paid a hefty price as a result of all the circumstances that prevailed in the past,” Hariri said at the headquarters of Arsal Municipality.

“Arsal's residents opened their houses and welcomed the refugees without any hesitation or conditions,” Hariri added.

“It is our duty as government to stand by Arsal's residents,” he stressed.

And noting that “all Arsal residents should return to their homes,” Hariri promised that “the government will execute several projects to the benefit of the town's residents.”

“Arsal is not an isolated island and services will reach it. There will be a secondary school and a government hospital,” Hariri added.

Addressing Arsal's residents, he went on to say: “You have sacrificed a lot like no other region has done. The state and the army are your sanctuary.”

“The army will deploy in all the outskirts (of the eastern border towns) and it is the sole defender of Lebanese land. Our duty is to provide the army with all the capabilities needed to preserve our land,” Hariri added.

Hariri's visit to the eastern border towns comes a day after the army announced that it had managed to liberate 100 out of 120 square kilometers of territory from IS' hands after four days of battles.

On Wednesday, the army began a deployment operation in border areas liberated from IS militants, as it started preparations to launch the fourth stage of Operation Dawn of the Outskirts, an army statement said.

Around 20 days ago, jihadists from al-Nusra Front group and scores of Syrian refugees were evacuated from Arsal's outskirts followed a six-day Hizbullah offensive in the border region.

The army did not take part in that battle but it shelled militants seeking to advance towards the town of Arsal and the nearby refugee encampments.

Militants from both IS and al-Nusra had invaded Arsal in 2014 before being ousted by the army after days of deadly battles. The jihadists of both groups remained entrenched in the outskirts of several border towns until this summer.

Tripoli and Akkar are the poorest most underdeveloped areas of Lebanon. What has Hariri done for his constituency? I have a coworker from Tripoli who showed me photos of areas of Tripoli you would think they were taken in the slums of New Delhi.

Let us send all the politicians to love there for a week and see how fast this changes.

Hariri from Arsal: State is Your Sanctuary

if the state has no sanctuary and its officers are getting beaten up how relevant is hariri's statement :)