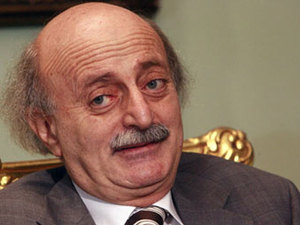 The Druze leader was accompanied by his son Taimur and MP Wael Abu Faour and the meeting was held in the presence of Minister Ghattas Khoury.

“The visit was agreed on a long time ago, but my personal circumstances and travel, and then Sheikh Saad's travel to the U.S., have delayed it for merely technical and personal reasons,” Jumblat told reporters.

“Today we meet to evaluate the situations in the country, which are improving,” the PSP leader added.

“There are other issues that we will discuss with Sheikh Saad – social issues and other topics – and it is not strange that I'm at the Center House now,” Jumblat went on to say.

“We had some disputes and we have to organize them and to listen to Sheikh Saad's suggestions,” the PSP leader added.

He also promised to “fine-tune” his tweets, some of which were the reason behind the strain in ties between the two allies. Hariri's nomination of Michel Aoun for the presidency and his acceptance of proportional representation were also among the points of contention between the two leaders.

Then it takes one extra day to change against...