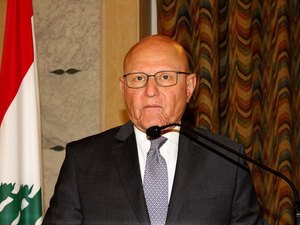 Prime Minister Saad Hariri and Progressive Socialist Party chief MP Walid Jumblat on Tuesday threw their support behind ex-PM Tammam Salam in the face of criticism addressed to him and his 2014 government over the abduction of dozens of troops at the hands of jihadist groups.

“Tammam Salam will not be affected by the attacks of the prejudiced parties. We stood by him and we always will... Enough is enough,” Hariri tweeted.

He added: “I don't remember that those attacking Tammam Beik Salam today had withdrawn from his government back then in protest at what they are claiming today.”

Jumblat for his part tweeted: “Enough with manipulating the sentiments of the families... In war, any soldier faces martyrdom or captivity and it is shameful to pin the blame on Tammam Salam.”

Hizbullah, the Free Patriotic Movement and some of their allies have criticized Salam's government, Hariri and former army chief Jean Qahwaji over the events of the 2014 battle against the Islamic State and al-Nusra Front jihadist groups, accusing them of ordering a premature halt to the fighting that allowed the militants to abduct around 30 Lebanese troops and policemen to the outskirts of the border town of Arsal.

The war of words comes after eight Lebanese troops who were still in IS' hands were announced dead on Sunday.

The fate of the troops was unveiled as part of an agreement led by Hizbullah. The agreement followed separate but simultaneous anti-IS assaults by Hizbullah and the Lebanese and Syrian armies on both sides of the border that ended with the surrender of the IS militants.

IS fighters who surrendered on both fronts were allowed to leave with their families to Syria's Deir Ezzor province as part of the deal that also involved the handover of a Hizbullah captive and bodies belonging to slain Hizbullah fighters.

10 August 2014
Foreign Minister Gebran Bassil said Sunday that any trade off between Islamist militants in Arsal now – who are holding a number of police and army hostages – and the release of Islamists currently in jail is out of the question.
https://en.annahar.com/article/159948-bassil-no-prisoner-swap-of-arsal-soldiers-for-roumieh-inmates

16 December, 2014
Free Patriotic Movement leader MP Michel Aoun “has said that the state cannot negotiate with terrorists and he did not mention the issue of a swap deal,” Bou Saab clarified.
http://www.naharnet.com/stories/en/159430

but the terrorist militia of hezbollah was negotiating with ISIS to release its captives while it put conditions on the government back then not to negotiate with ISIS. If negotiations had taken place then, our soldiers would be alive today.

Here is an article from naharnet where hezbollah negotiated with ISIS to release Imad Ayyad.
http://www.naharnet.com/stories/en/156971

No one can deny that Ebola is a disease.

Who paralyzed the country during 2 1/2 years? Ebola and their servant. They were the ones who knew what was happening.

To the followers of Ebola:

You can insult as much as you like. We have already decided NOT to live with you and your backaged culture.