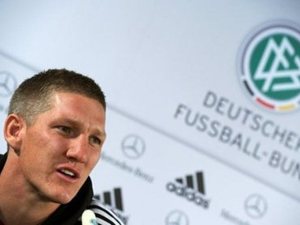 Germany international Bastian Schweinsteiger will not return to action until the start of the new year following recent surgery on a broken collarbone, his club Bayern Munich said on Thursday.

Bayern sporting director Christian Nerlinger said last week he hoped the midfielder would return before the start of the Bundesliga's winter break.

However, a day ahead of Bayern's hosting of Cologne in their final league match of the year, coach Jupp Heynckes said: "There's still too big a risk."

The 27-year-old Schweinsteiger had a plate inserted in his right shoulder after breaking his collarbone following a heavy fall in the 3-2 Champions League win over Napoli on November 2.

Bayern travel to Bochum for a last 16 fixture in the German Cup prior to Christmas.

The Bavarian giants will meet again on January 2 for a week-long training camp in Qatar, and play a friendly in New Delhi on January 10 before flying back to Germany a day later.