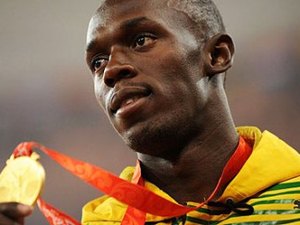 Record-breaking sprinter Usain Bolt says he will not be regarded a legend of athletics unless he successfully defends his three Olympic titles in London next year.

"I want to be a legend in the sport and defending my Olympic titles will definitely help me in achieving this goal," the 25-year-old Jamaican was quoted as saying by the Times of India on Friday.

The Jamaican created history at the 2008 Beijing Olympics when he won the 100m, 200m and the 4x100 relay gold medals, all with world record timings.

Bolt, however, parried a question on whether he will improve on his timings in London.

"I never talk about world records," he told the newspaper. "My aim is to win first and foremost. If the weather is good in London, who knows."

Bolt, who was disqualified in the 100m at this year's world championships in Daegu, South Korea, said he preferred the old rule where a sprinter was given a second chance after a false start.

"A rule is a rule and you have to accept it," he said. "After what happened in Daegu, I think I liked the old rule better.

"It (the false start) wasn't something that I had planned to happen, but then these things are part of sport. You cannot really do much when they occur. I hope it does not happen again."

Bolt was, however, pleased with his performance this year.

"It has been a good year for me overall," he said. "I was undefeated, won the 200m and 4x100m events at the world championships, set a new world record in the 4x100m and was also voted the athlete of the year.

"I was very happy to get through 2011 without any injuries and was able to resume training fully healthy. If I keep working hard over the next six months I will be ready for London."

Bolt side-stepped a question about whether compatriot Yohan Blake, who won the 100m tile in Daegu, will be a threat to him in London.

"Yohan has been training with me for the past three years and I have been telling people that he is really good," he said. "(But) I never single out one athlete as a threat. I treat everyone seriously.

"When I am fit and healthy I am very hard to beat in any race."