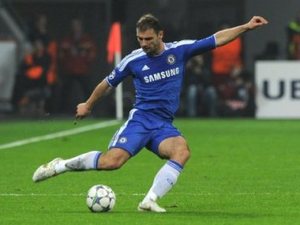 England's two surviving representatives in the Champions League, Chelsea and Arsenal, were handed tough ties against Italian opposition in Friday's draw, while holders Barcelona will come up against Germany's Bayer Leverkusen.

Chelsea will take on Napoli, while Arsenal will meet reigning Serie A champions AC Milan, with both Premier League clubs travelling to Italy first.

Chelsea will know not to take Walter Mazzarri's side lightly after they qualified for the last 16 at the expense of Manchester City.

For Arsenal, meanwhile, the clash with Milan is a repeat of their meeting at the same stage in 2007-08.

On that occasion the Gunners won 2-0 on aggregate, with Cesc Fabregas and Emmanuel Adebayor scoring late goals in the second-leg at the San Siro after a goalless first-leg.

Barcelona will go to Germany first to face the 2002 runners-up Leverkusen, who qualified from Group E behind Chelsea.

Elsewhere, Real Madrid, who romped through the group stage, winning all six games in Group D, will face CSKA Moscow, while Bayern Munich, who are hoping to reach the final at their own Allianz Arena, will meet Manchester United's conquerors Basel.