Geagea and Gemayel Travel to Saudi Arabia for Political Talks 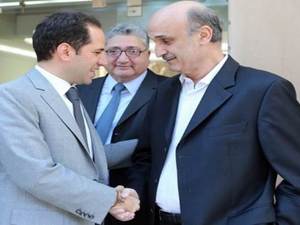 Geagea and Social Affairs Minister Pierre Bou Assi “traveled via the Rafik Hariri International Airport, beginning a foreign tour whose first stop will be the Kingdom of Saudi Arabia,” an LF statement said.

A Kataeb statement meanwhile said Gemayel had arrived in the Saudi city of Jeddah accompanied by his adviser Albert Kostanian.

Gemayel arrived in Jeddah “at an official invitation addressed to him by the Kingdom of Saudi Arabia,” the statement said.

Arab Tawhid Party leader ex-minister Wiam Wahhab, who is close to Damascus and Hizbullah, meanwhile took to Twitter to voice concern over the previously unannounced visits.

“We hope the sudden Saudi invitations to some Lebanese figures are not an attempt to re-inflame tensions in the Lebanese arena,” Wahhab said.

i think i'm lost, i must be getting old because i don't know where the Luthians live.

This article should be retitled : 2 beggers going to Saudi Arabia
along with IceNorMan allowed to drive now on her way back

so how's your work in Mameltein dear Terrorist troll ?