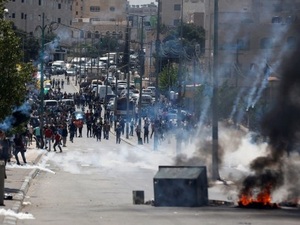 Israel's military chief of staff on Wednesday reduced the sentence of a soldier convicted of manslaughter for shooting dead a prone Palestinian assailant by four months, in a case that has deeply divided the country.

Azaria, 21, was convicted in a military trial that led to an extraordinary public rift between military chiefs and the country's top politicians.

Military chief of staff Gadi Eisenkot had repeatedly denounced Azaria's actions, putting him at odds with right-wing politicians including Prime Minister Benjamin Netanyahu who called for the soldier to be released.

"Despite the fact that it is clear from the words of the chief of staff that Azaria's actions were contrary to the code of conduct and to the values of the IDF (Israeli army) ... he decided to do so out of consideration of the fact that he is a combat soldier and a warrior" who had "endured a lot," Conricus said of the reduction.

In a letter to Azaria, Eisenkot wrote that "it must be said from the outset clearly and unequivocally that from the point of view of the chief of staff, your conduct was inappropriate and contrary to army orders and to the army's values."

"The chief of staff however believed that it was appropriate to consider grace and mercy considering your past as a combat soldier in the operational arena."

The March 2016 shooting in the occupied West Bank city of Hebron was caught on video by a human rights group and spread widely online.

It showed Abdul Fatah al-Sharif, 21, lying wounded on the ground, shot along with another Palestinian after stabbing and wounding a soldier, according to the army.

Some 11 minutes after the initial shooting, Azaria, a sergeant and military medic at the time of the incident, shot him in the head without any apparent provocation.

He said he feared Sharif was wearing an explosive belt and could blow himself up, a claim judges rejected.

"His motive for shooting was that he felt the terrorist deserved to die," Judge Colonel Maya Heller said as she read the verdict in January.

On July 30, a military court rejected Azaria's appeal against his conviction for manslaughter and upheld the prison sentence.

The French-Israeli could have appealed to the country's supreme court, but opted not to after Defense Minister Avigdor Lieberman pleaded for him to allow the country to move on.

He instead requested a reduced sentence from Eisenkot, asking for community service instead of prison time.

Azaria can also request a pardon from Israeli President Reuven Rivlin, with right-wing leaders including Netanyahu calling for it to be granted.

The trial captivated Israel and highlighted deep divisions in public opinion between those who decry the shooting and those who say it was justified.

Human rights groups pointed to the case as an example of what they call an unequal system of justice for Israelis and Palestinians.

Amnesty International has said Azaria's sentence does "not reflect the gravity of the offense." The U.N. human rights office said it was an "unacceptable" punishment for "an apparent extra-judicial killing."

The Israeli government fears it is running out of cold-blooded killers.