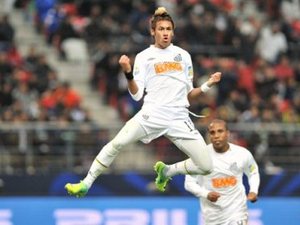 Santos take on Barcelona in the final of the Club World Cup on Sunday, pitting Lionel Messi against Neymar in what is being billed as a clash between two of the finest players on the planet.

The European champions Barca will be clear favorites against the Brazilians, who were sublime going forward but edgy at the back in their semi-final 3-1 defeat of Japanese side Kashiwa Reysol on Wednesday.

There was no such trouble in Japan for the Catalans, who thrashed Qatari side al-Sadd 4-0 on Thursday to set up the highly anticipated showdown with the South American champions and their highly rated young striker Neymar.

But the easy victory came at a heavy price for Pep Guardiola's side, who lost prolific forward David Villa to a leg fracture that will see him out for up to five months. Guardiola has admitted his men were shaken by the injury.

The Barca coach, who has won every trophy going in his three-and-a-half years in charge including the Club World Cup in 2009, said he had told his players to expect Santos to play on the break.

"They are likely to counter-attack and they are dangerous because of Neymar," said Guardiola, also stressing that Santos were more than just their 19-year-old talisman, and were a fast team packed with tall players.

"Rather than tactics, we want to control the game and have a good percentage of ball possession," said Guardiola, asked how the Spanish champions, widely regarded as one of the best club sides ever, would deal with the Neymar threat.

"Everybody talks about Neymar, but they have many good players. We must play a perfect game."

Midfielder Cesc Fabregas, who was on the bench in the defeat of Asian champions al-Sadd, said: "I don't think only about Neymar, I think about Santos. He is an excellent player, but he is not the only one we will face.

The former Arsenal man added: "He can play in any team in the world. He may score three or four goals tomorrow. We will welcome him if he plays for Barcelona, but he is an enemy tomorrow."

Neymar, who has been linked with every top side in Europe including Barcelona and Real Madrid, hit a superb first goal in his side's nervous win over Kashiwa, with fellow forward Borges and the defender Danilo also scoring.

Santos coach Muricy Ramalho said after the Kashiwa win that his side would need to defend far better against Messi and company.

The Argentine superstar was not at his brilliant best on Thursday, where he set up one goal but displayed only tantalizing glimpses of his trademark mesmerizing dribbling skills for a packed house of over 60,000 in Yokohama.