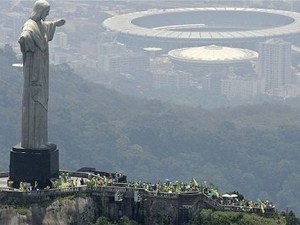 FIFA president Sepp Blatter said Saturday that there were concerns about preparations for the 2014 World Cup in Brazil, adding he was taking action personally and will meet the government in the new year.

"The executive committee is worried about that," he said when asked about preparations for the showpiece tournament, which have been dogged by fears they are running behind schedule.

The world footballing body said it had received positive news about stadium construction, but not about the necessary government guarantees on the organization of the event.

"Clearly Brazil is not advanced in preparations for the World Cup," he said in Tokyo, citing a lack of infrastructure including a new airport and poor public transport and roads.

According to a report by the Getulio Vargas Foundation and the consultancy Ernst & Young, Brazil needs more than $11 billion in investment to fix roads, boost hotel capacity, reinforce security and develop its telecommunications network ahead of the Cup.

Last month FIFA warned Brazil anew about delays in construction projects expected to be ready for the quadrennial extravaganza.

Brazilian authorities are racing to build or renovate 12 stadiums in time for the event, and Sports Minister Aldo Rebelo pledged earlier this month that work on the venues will largely be completed ahead of schedule.

Blatter and Valcke were speaking after a meeting of FIFA's executive committee in the Japanese capital.