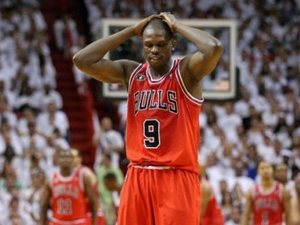 The Chicago Bulls opened the pre-season Friday with a 95-86 win over the Indiana Pacers behind 16 points each from MVP Derrick Rose and Luol Deng.

The game was a rematch of last season's National Basketball Association first-round playoff series and one of four games on Friday that kicked off the post-lockout exhibition schedule.

C.J. Wilson scored 15 points for Chicago, who won the playoff series over the Pacers four games to one.

Tyler Hansbrough finished with 19 points and 12 rebounds and Paul George had 17 points and 10 rebounds for Indiana.

Danny Granger scored 12 points and Indianapolis native George Hill had three points in his first game as a Pacer after being acquired from the San Antonio Spurs.

A lockout-shortened season of 66 regular season games for each team rather than 82 will begin on December 25, about eight weeks later than originally planned.