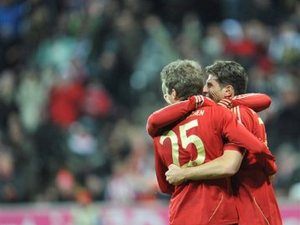 Bayern Munich overcame an early red card for star forward Franck Ribery to beat Cologne 3-0 on Friday and ensure it remains at least three points clear at the top of the Bundesliga before the four-week winter break.

Ribery was sent off in the 33rd minute, earning a second yellow card for grabbing at Henrique Sereno's face just half a minute after both were shown a yellow for clashing in the penalty area.

"Of course, he shouldn't allow himself be provoked there," Bayern coach Jupp Heynckes said. "But my team showed a great and patient reaction."

Mario Gomez scored his league-leading 16th goal of the season to put the home side ahead in the 48th minute.

Substitute David Alaba scored in the 63rd, when Cologne failed to deal with Toni Kroos' corner, and the Austrian returned the favor for Kroos to round off the scoring in the 88th.

Bayern is six points clear of Borussia Dortmund and Schalke before the weekend's other games.

Bayern's first win over Cologne in six attempts, and its first at home since March 2002, means it claims the Bundesliga's unofficial title of 'winter champion.'

Ribery's sending off didn't affect Bayern's dominance, but the home side failed to make the breakthrough until Gomez scored after a mistake from Geromel.

The ball was quickly played to Thomas Mueller and he held off Youssef Mohamad's challenge, drawing out Rensing, before crossing for Gomez to stroke the ball into the empty net.

Despite the extra player, Cologne failed to respond.

"You noticed it was our third game in six days," Cologne coach Stale Solbakken said.