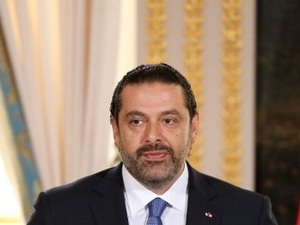 Prime Minister Saad Hariri said on Monday that the government cannot carry on with the implementation of the wage scale without securing revenues to fund it.

“We have heavily burdened the State with the salary scale. We can't continue without revenues,” said Hariri.

The PM noted that former governments and parliaments had lengthily discussed the tax hikes law, adding -- in an indirect hint at ten MPs including Kataeb party leader MP Sami Gemayel who appealed the law -- that “parties who oppose it today had previously agreed to it.”

“Earmarking funds for the wage scale without taxes will obligate us to borrow, which will put our country in a difficult situation. We do not want to impose taxes on the poor,” he noted.

After the parliament approved the revised tax law in the evening, Hariri announced that "the imposed taxes are largely focused on firms, banks and wealthy citizens."

"It is rejected to claim that some MPs and ministers are supportive of low-income citizens more than others," he added.

"Wrong information is being circulated about the revenues needed for the wage scale," Hariri decried.

"Approving the wage scale without reforms and revenues would lead the country into a disaster," he warned.

"Whoever agrees to the wage scale must also approve its revenues that come through taxes," he added, addressing the opponents of the tax bill.

"Those who don't care about reforms and revenues are irresponsible and they only care about populist stances," Hariri added, in an apparent reference to Gemayel.

Hariri's comments came after a parliament meeting dedicated to looking into three draft laws approved by the Cabinet, including the newly approved scale for civil servants and armed forces.

Public sector salaries for the month of October were disbursed based on the new scale, but difficulties arose after the Constitutional Council revoked the tax law aimed at funding it. Fears arose over its suspension in coming months.

Late in August, the Constitutional Council ordered the tax law suspension after an appeal against it by ten MPs led by Gemayel.

that says a lot.