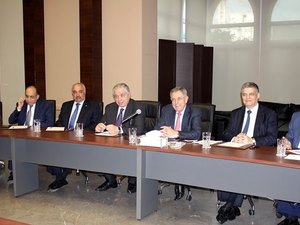 “Sayyed Hassan Nasrallah is continuing his campaign against the Kingdom of Saudi Arabia and the Arab Gulf countries in an appalling and rejected manner,” said the bloc in a statement issued after its weekly meeting.

It warned that this might lead to “harming the interests of Lebanon and the Lebanese and straining their relations with their Arab brothers, especially the Arab Gulf countries.”

“Regional peace and security can be achieved when Saudi Arabia stops backing Wahhabist groups... Saudi Arabia is preventing security and peace in Yemen, Bahrain, Iraq and Pakistan,” Nasrallah had charged on Sunday.

that says a lot.

Glad to see that el Mustaqbal is standing its ground against Kizballah but in reality what can they do past call them for who they are?