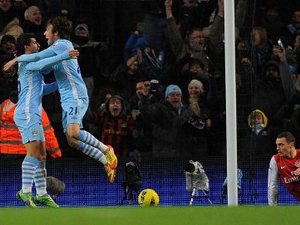 Real Madrid recovered from their El Clasico defeat to Barcelona to stun Sevilla 6-2 while Manchester City stayed top in England.

City remained two points in front of champions Manchester United after a 1-0 win at home to Arsenal thanks to a 53rd-minute winner from David Silva.

United saw off Queens Park Rangers 2-0 at Loftus Road with Wayne Rooney on the scoresheet in the first minute before Michael Carrick made the game safe for the visitors in the 56th minute.

Tottenham are third, leapfrogging Chelsea, after a 1-0 win at home to strugglers Sunderland with Russia striker Roman Pavlyuchenko scoring the only goal.

Chelsea were held to a 1-1 draw by Wigan while Liverpool are sixth, just behind Arsenal, after a 2-0 win away to Aston Villa.

In Spain, Cristiano Ronaldo smashed a hat-trick as 10-man Real Madrid crushed Sevilla 6-2 to storm back to the top of La Liga and a three-point lead over Barcelona.

Jose Callejon, Angel Di Maria and Haltin Altintop were also on target in a match where Jose Mourinho's team were reduced to 10 men just before half-time when defender Pepe was red-carded.

Jesus Navas and Alvaro Negredo grabbed consolations for Sevilla while Madrid were also indebted to goalkeeper Iker Casillas for a wonder save when the advantage was only one goal.

Real will finish 2011 on top as Barcelona were involved in the Club World Cup in Japan where they defeated Santos 4-0.