Derby Win Takes Juventus back to Serie A Summit 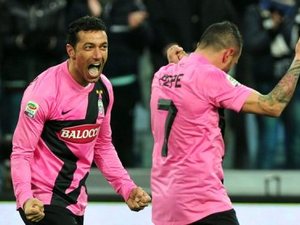 Juventus returned to the top of Serie A following a 2-0 victory at home to Novara on Sunday, while Inter Milan's revival continued as they won 1-0 at Cesena to climb to fifth place.

Juve's win enabled them to leapfrog AC Milan, who had taken over at the top by beating Siena 2-0 on Saturday.

Udinese missed the chance to draw level with Antonio Conte's side when they were held to a 2-2 draw at Lazio and remain in third place, two points off the pace.

Juve laboured to impose themselves against their Piedmont rivals Novara, promoted from Serie B at the end of last season after a 55-year absence from the top flight.

Novara defended valiantly but were always chasing the game after Simone Pepe converted a low cross in the fourth minute to claim his fifth goal of the season.

Fabio Quagliarella, preferred in attack to Alessandro Matri, made the game safe with Juve's second goal in the 75th minute.

"We're good at creating chances, but less good at taking them," reflected Juve coach Conte. "Playing like that means we take risks with the coronaries of the man on the bench!"

Defending champions Milan had enjoyed a straightforward outing against Siena, prevailing through goals from Antonio Nocerino and a contentious Zlatan Ibrahimovic penalty -- his 10th goal of the season.

Udinese were in front against Lazio after 28 minutes thanks to a diving header from Antonio Floro Flores but Lazio drew level two minutes before the interval when Slovenia international Senad Lulic found the net.

Veteran German striker Miroslav Klose then put Lazio ahead with a crisp volley in the 51st minute for his ninth goal of the season.

But Udinese were rewarded for their positive approach when Giampiero Pinzi equalized in the 73rd minute.

Inter may be outside the title picture, but they appear to have put their early-season miseries behind them following their third straight victory.

A solitary headed goal from Andrea Ranocchia was enough to take the 2010 champions into the European places, but they are still 10 points off Juve's pace.

"I've never seen my team misplace as many passes as they did today," Inter coach Claudio Ranieri told Sky Sport.

"The only thing we'll take from this match is the points. If you wanted spectacle, you needed to be watching the TV at half-past 11," he added, in reference to Barcelona's 4-0 defeat of Santos in the Club World Cup final.

Napoli remained in sixth place after losing 3-1 at home to Roma, who are now seventh but also on 21 points.

Napoli fell a goal down after just three minutes when Morgan De Sanctis put through his own goal off a cross by Roma's Argentine forward Erik Lamela.

Pablo Osvaldo, in the 59th minute, and Fabio Simplicio, in the last minute, added to Roma's total, easing the pressure on coach Luis Enrique.

Marek Hamsik had briefly given Napoli hope with an 82nd-minute strike.

"Tonight it was a great Roma performance," said skipper Francesco Totti. "We showed our competitiveness in this championship. If we play like this again, and like we did in the 1-1 draw against Juve, we can go a long way."