The Israeli-Palestinian Conflict: 100 Years of History 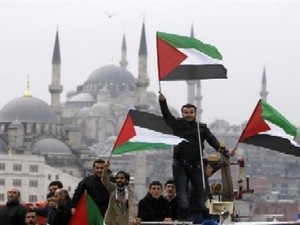 The Israeli-Palestinian conflict has its roots in the late 19th century when Jews fleeing anti-Semitism in Russia and central Europe began emigrating to Palestine.

Here is a timeline:

In 1917, during World War I, the British capture Palestine from the Ottomans and, in the Balfour Declaration of November 2, promise the Jews a "national home" there.

Opposition from the Palestinians first emerges at a congress in Jerusalem in 1919.

In 1922, the League of Nations sets out the obligations of a British mandate in Palestine, including securing "establishment of the Jewish national home", the future Israel.

Britain crushes the great Arab revolt in Palestine of 1936-1939.

Palestine is partitioned into Jewish and Arab states under United Nations Resolution 181, approved in November 1947. Jerusalem is put under international control.

In the split, the West Bank including east Jerusalem goes to Jordan and the Gaza Strip to Egypt.

The state of Israel is finally created on May 14, 1948, provoking an eight-month war with Arab states.

More than 400 Palestinian villages are razed by Israeli forces and around 760,000 Palestinian refugees flee to the West Bank, Gaza and neighboring Arab countries.

The Palestine Liberation Organization (PLO) is created in 1964.

In the Six-Day War in June 1967, Israel defeats Egypt, Jordan and Syria and occupies east Jerusalem, the West Bank, the Gaza Strip and the Golan Heights.

Jewish settlement of the occupied territories starts shortly afterwards and continues in the West Bank, east Jerusalem and the Golan Heights today.

The first intifada, or Palestinian uprising against Israeli rule, rages from 1987 to 1993.

In 1993, Israel and the PLO sign a declaration on principles for Palestinian autonomy after six months of secret negotiations in Oslo, launching an abortive peace process.

PLO leader Yasser Arafat returns to Gaza in July 1994 to create the Palestinian Authority. Self-rule is established for the first time in the Gaza Strip and the West Bank town of Jericho.

In September 2000, right-wing Israeli opposition leader and future prime minister Ariel Sharon visits the Al-Aqsa mosque compound in east Jerusalem, a site holy to Muslims and Jews, who refer to it as the Temple Mount, sparking the first clashes of the second intifada.

Responding to a wave of suicide bombings, Israel in 2002 invades the West Bank in its largest operation there since the 1967 war.

Moderate Mahmoud Abbas takes over the leadership of the Palestinian Authority in January 2005, after the death of Arafat.

The last Israeli forces leave Gaza after a 38-year occupation in September 2005.

In June 2007, Islamist movement Hamas seizes control of the Gaza Strip after ferocious fighting with its rivals in the Fatah faction led by Abbas, who remains in power in the West Bank.

In 2014, Israel launches a new operation against Gaza in an attempt to stop rocket fire and to destroy tunnels from the Palestinian territory.

Hamas and Fatah sign a reconciliation accord in October 2017 aimed at ending a decade of discord.