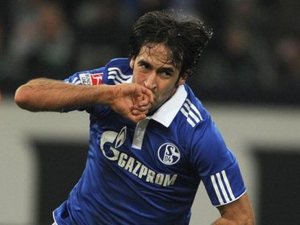 Veteran striker Raul has said he is eager to stay at Schalke 04 with his contract set to expire in 2012 and extension talks with the Royal Blues due to be held in the winter break.

The 34-year-old served a timely reminder of his finishing skills with a hat-trick in Schalke's 5-0 drubbing of Werder Bremen on Saturday before the German league began its traditional winter break.

Schalke's director of sport Horst Heldt has said the Royal Blues will sit down to discuss Raul's contract with the ex-Real Madrid star after Christmas, but the Spain veteran insists he wants to stay.

"I'm very happy here and would love to stay," said Raul with Schalke third in the Bundesliga behind leaders Bayern Munich and defending champions Dortmund.

"It was a big step from Real to Schalke, but it is a wonderful experience. I enjoy playing here."

Heldt revealed last weekend Schalke are interested in signing Germany striker Lukas Podolski from Cologne and talks with Raul are likely to be decided by how much money the Spaniard wants and how much Schalke can offer.

"I would like to extend the contracts of many players, even with Raul," said Heldt.

"I'd like to sign up Messi or Cristiano Ronaldo, but that is a wish list. You have to weigh things up. I do not know what his demands will be, he will be thinking of his future.

"I think his family is more important to him than money, it's about a fundamental decision for himself and his family."

With 10 goals in 17 games this season, Raul is not the top scorer at Schalke with Dutchman Klaas-Jan Huntelaar having scored 15 goals in 16 games.