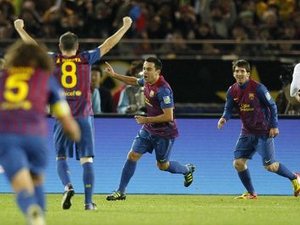 Messi, Xavi and Cesc Fabregas scored in the first half as the European champions won its 13th trophy under coach Pep Guardiola, solidifying its stature as the best club team in the world.

"The reason for our success is the effort of the players," Guardiola said. "We have very high-quality players and were able to display quality football. I am honored to work with these great players."

The Champions League winners looked unstoppable in the first half and got on the scoresheet in the 17th minute when Messi latched on to a through ball from Xavi, controlled it with his right foot, switched to his left and calmly chipped over Santos goalkeeper Rafael Cabral.

Xavi doubled the lead just seven minutes later when he took a pass from Dani Alves and beat Cabral with a right-foot shot from 16 yards.

Fabregas put the game beyond reach in the final minute of the first half, picking up a rebound off a diving header by Thiago and beating Cabral from close range.

"It wasn't easy at all," Fabregas said. "Santos made it difficult at the beginning but we were fortunate to score quickly and then another one a few minutes later. If you say it was easy it's because we played a very serious game and were very professional and disciplined and that made it look easy."

The South American champions looked more lively after the break. Neymar had a good chance in the 57th as he broke free and found himself in the open with only Victor Valdes to beat, but was denied by the Barcelona goalkeeper.

Messi, who was named the tournament's most valuable player, completed the scoring in the 82nd when he took a pass from Alves, maneuvered around Cabral and calmly slotted home.

"I'm excited about winning this title because we wanted to become the best in the world," Messi said. "I'm happy about my goals but, more than that, I am happy with the performance of the team."

The match was billed as a showdown between Messi and Santos' 19-year-old rising star Neymar but it was the Barcelona player who dominated.

"Barcelona deserved to win," Neymar said. "They are the best team in the world and we learned an important lesson tonight. We showed our potential and hopefully we will be able to come back and win this tournament."

Barcelona won the Club World Cup in 2009, with Messi scoring the winning goal in the 2-1 victory over Argentine Club Estudiantes.

The last time a team from South America won was 2006 when Internacional beat Barcelona.

"It's a very good day for this football club," Fabregas said. "It was very difficult to get here because you have to win the Champions League and you have to win the semifinal game and then the final against teams that maybe we are not used to playing because they come from other countries and different parts of the world . I think we have to be very proud of what we achieved today."

Borges gave Santos its first scoring chance in the 27th minute, when he took a pass from Ganso and fired a shot that Valdes smothered. Gerard Pique was given a yellow card in the 38th after knocking Neymar to the ground.

Barcelona was playing without striker David Villa, who broke his left shin bone in his team's 4-0 win over Qatari side al-Sadd in the semifinals on Thursday.