Around 200 Detained at Moscow Anti-Putin Protest 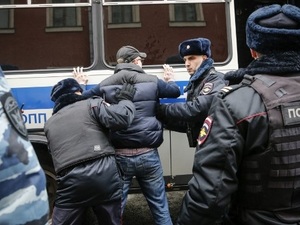 Radical opposition activist Vyacheslav Maltsev had appealed on his website for his supporters to hold protests across Russia on Sunday, calling for a "people's Revolution" and for an immediate end to Putin's rule.

"Currently the number of detained has reached 200," a police source told TASS after supporters of the banned radical opposition group gathered in central Moscow beside the Kremlin walls.

OVD-Info, which monitors detentions at political protests, said that 212 people were held in Moscow, as well as 25 people in five other cities.

Many of those detained were carrying knives, knuckledusters and pistols that can fire rubber bullets, TASS reported. It said police were detaining activists after searching them.

An AFP photographer said police, some in helmets and bullet-proof vests, picked up the protesters one by one in central Moscow close to the Kremlin.

A reporter for popular Echo of Moscow radio station, Andrei Yezhov, wrote on Twitter that he had been detained and posted video from inside a police van, saying most of those held were in their early 20s. He was later released without charge.

Maltsev last year ran for a parliament seat and has a popular YouTube channel with critical political commentary.

He lives in the regional city of Saratov but has fled to Paris after a Moscow court issued an arrest warrant for him over calls for extremist activity.

His movement called Artpodgotovka was banned by a court in October.

The protest on Sunday came after police in Moscow on Saturday detained dozens of people at a nationalist anti-Kremlin march on a public holiday known as the Day of National Unity.