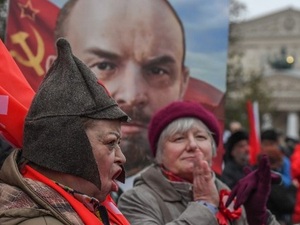 Russian authorities were reluctant to celebrate the 100th anniversary of the 1917 Bolshevik Revolution on Tuesday, with just low-key events being held to mark an uprising that launched more than 70 years of Communist rule.

President Vladimir Putin, who has made "stability" the keyword of his 17 years in power, would be treating the day as any other, his spokesman Dmitry Peskov said previously.

Russian media had an ambiguous reaction to the centenary, with pro-Kremlin tabloid Komsomolskaya Pravda asking on its front page: "Great celebration or big tragedy?"

Moscow will see a march and rally organized by the Communist Party -- still the largest opposition party in parliament -- to glorify the anniversary.

The party said its slogans will include "Lenin-Stalin-Victory!" and "Let Lenin's ideas live!"

But authorities have allowed just 5,000 participants for the afternoon rally beside a Karl Marx statue close to the Kremlin, the TASS state news agency reported.

Leftwing radical group The Other Russia, led by writer Eduard Limonov, is also set to hold an event in the capital.

Throughout the Soviet era, anniversaries of the revolution were marked with a public holiday which included pomp and military parades on Moscow's Red Square.

Under Putin, November 7 became a regular working day in 2005.

This year there was again a parade on the square, but the event was to mark the 76th anniversary of a parade during World War II, rather than the centenary of the revolution.

The centenary is the last landmark event before a presidential election in March that Putin is widely expected to contest and win.

Putin has skipped key commemorative events including a 3D light show this weekend on the facade of the Winter Palace in his hometown of Saint Petersburg.

The armed uprising began on October 25, 1917 -- which is November 7 according to the modern-day Gregorian calendar --  after a shot was fired at the Winter Palace by the Aurora cruiser ship.

One of the few events linked to the centenary Putin has attended was the opening of a new church in Moscow, which he called "deeply symbolic" after the revolution led to the destruction of religious buildings and persecution of believers.

Putin said this month that the revolution was "an integral, complex part of our history", emphasizing the need for "treating the past objectively and respectfully".

The Kremlin has charged a committee of politicians, historians and clerics with organizing this year's festivities.

Organiser Konstantin Mogilevsky stressed at a presentation last month that the events were "not celebrations" of 1917 but were intended to be a "calm conversation about revolution, aimed at understanding it".

Russia's leadership is desperate to avoid repeats of the "color revolutions" in other ex-Soviet countries, he said.

New period dramas on television have been some of the main forums for re-examining history.

One depicts revolutionary leader Leon Trotsky as a "rock 'n' roll hero", according to its makers, while another examines Germany's role in fomenting the Bolshevik Revolution.

But many Russians are barely aware of the anniversary, commentators said.

"The country that once counted its existence from October (1917) is now seeing in its centenary in deafening silence," wrote historian Ivan Kurilla in the Vedomosti business daily.

"For an ordinary Russian, the centenary is passing by unnoticed," he added.

A report commissioned by the Communist Party found that 58 percent of Russians were not aware of the anniversary.

November 7 is still a day off in neighboring Belarus under the  Soviet-style rule of President Alexander Lukashenko.

But the last other such country, ex-Soviet Kyrgyzstan, canceled its November 7 public holiday this year.